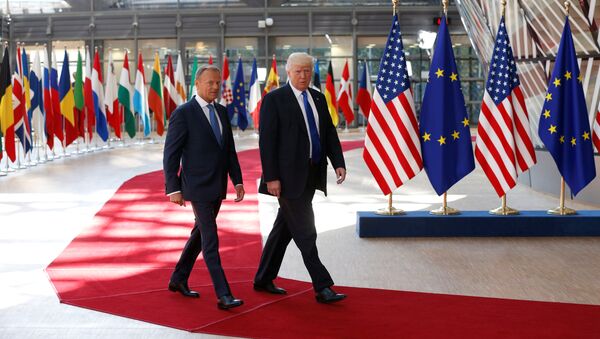 On the eve of Donald Trump's visit to Brussels the question on everyone's lips was whether the US president would raise the issue of a mandatory 2 percent contribution to NATO, RIA Novosti political analyst Vladimir Ardayev noted. It appears that the bloc members' worst fears have been confirmed.

Trump's First Speech at NATO Summit Hints at Prospects of US-Russian Relations
US President Donald Trump's first foreign trip is coming to an end; however, Trump's statement at the NATO headquarters in Brussels has signaled that the real trouble has started for America's "brothers in arms."

RIA Novosti political analyst Vladimir Ardayev noted in his recent op-ed that the agenda of the summit envisaged two main issues: the fight against terrorism and the distribution of the financial burden among NATO member states.

While the first issue didn't raise any special questions, the second one prompted growing concerns given Trump's previous calls for "fair burden sharing."

"At the Welsh summit in 2014, the alliance members agreed that each of them will spend at least 2% of its gross domestic product (GDP) on NATO contributions," Ardayev wrote. "However, up until now, only five out of 28 NATO member states fulfill this promise. These are the USA, Great Britain, Poland, Greece, and Estonia. The United States spends the most on NATO's needs — 3.61%. The authorities of Latvia have promised to reach a two-percent threshold this year."

Still, most of the alliance's members have yet to meet the commitment. A number of countries, such as the Czech Republic, Slovakia, Hungary, Spain, Denmark, Belgium, Luxembourg and Albania contribute only 1 percent of their GDP to NATO.

What is more surprising, however, is that the EU flagship, Germany, spends only 1.2 pecent of GDP on the military bloc's needs.

UN: Trump Cuts Will Make Global Peacekeeping 'Simply Impossible'
Although the Welsh agreement envisages a ten-year period for its full implementation, Donald Trump has repeatedly expressed his dissatisfaction with the current state of affairs and even threatened to decrease the US funding to the bloc, the political analyst noted.

Moreover, Trump went even so far as to propose a tightening of the agreement.

Thus, unsurprisingly, America's NATO allies were a bundle of nerves ahead of the summit, Ardayev remarked.

However, some observers predicted that Trump could refrain himself from criticizing NATO "freeloaders" referring to the fact that his views regarding the military bloc have recently undergone a certain metamorphosis. For instance, in contrast to his earlier claims Trump signaled recently that NATO is "no longer obsolete."

Alas, Trump's speech at the NATO headquarters left no doubt that the US president is determined to force his allies to fork out.

"Members of the alliance must finally contribute their fair share and meet their financial obligations," Trump told NATO member countries. "Twenty-three of the 28 member nations are still not paying what they should be paying and what they are supposed to be paying for their defense. This is not fair to the people and taxpayers of the United States."

But that is not all. As The New York Times remarked, Trump has yet again failed to pledge his commitment to Article 5, dedicated to the alliance's collective defense.

Instead of endorsing the "one-for-all, all-for-one" principle, the US president "offered a vague promise to 'never forsake the friends that stood by our side' in the aftermath of the Sept. 11 attacks — a pledge that White House officials later said amounted to an affirmation of mutual defense," the media outlet wrote.

Tusk After Talks With Trump: EU's, US' Stances on Climate, Trade Still Differ
Likewise, the US president didn't meet the expectations of European Council President Donald Tusk: as it turned out, the two politicians have differing visions on dealing with Russia, climate change  and trade.

"We discussed foreign policy, security, climate and trade relations," Tusk said after he met Trump. "My feeling is that we agreed on many areas, first and foremost on counterterrorism…. But some issues remain open like climate and trade and I am not 100 percent sure that we can say today… that we have a common position… about Russia, although when it comes to the conflict in Ukraine it seems that we were on the same lines."

Despite the simmering dissatisfaction with Trump's visit among the EU leaders, American polling company Rasmussen Reports has found out that Trump's national approval rating has climbed from 43 to 48 percent over the week.