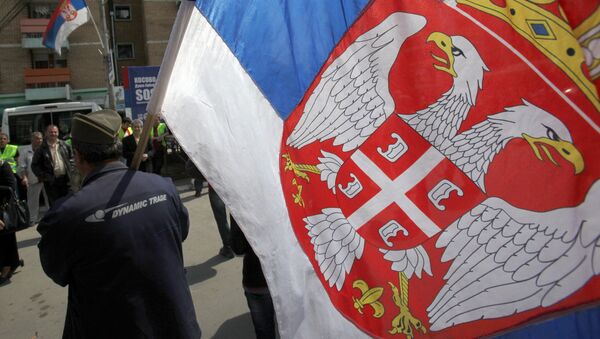 Ahead of the parliamentary elections in the Republic of Kosovo, one of the front runners for the position of the Prime Minister, Ramush Haradinaj, stated that if he wins there will be no place neither for Serbia nor for Serbian municipalities in Kosovo. Serbia's Minister of Internal Affairs commented to Sputnik on the issue.

"The Albanian side not only tries to make the process on normalization of the relations with Belgrade meaningless but seeks to demonstrate that Serbs have no place neither in Kosovo nor in Metohija," Serbia's Minister of Internal Affairs Nebojsa Stefanovic told Sputnik Serbia.

Kosovo – Creation of the West That 'Will Now Form the Kosovan Parliament'
"The recent remarks of Ramush Haradinaj and Kosovan-Albanian politicians close to his party (the Alliance for the Future of Kosovo) have made it absolutely clear that the ongoing dialogue in Brussels [between Belgrade and Pristina] loses any sense due to the behavior of Pristina," Stefanovic added.

His comments follow the recent statement of Ramush Haradinaj, one of the front runners for the position of the Prime Minister in the country's snap parliamentary elections, which are scheduled for June 11.

Ramush Haradinaj, the former field commander of the Kosovo Liberation Army, the former prime minister and the current leader of the Alliance for the Future of Kosovo political party has recently said that if he wins there will be no place neither for Serbia nor for the Community of Serb municipalities in Kosovo.

Saudi Wahhabi Missionaries and Arab Donors 'Active in Kosovo,' Germany Admits
In accordance with the competences given by the European Charter of Local Self Government and Kosovo law, the participating municipalities will be entitled to cooperate in exercising their powers collectively through the association. The association will have full overview of the areas of economic development, education, health, urban and rural planning.

It was expected to be created in 2015 but indefinitely postponed over conflicts about extent of powers. The negotiations between the two sides are still going on in Brussels.

"There is simply no sense to continue the talks with the people who try to cancel everything which had been agreed upon and signed. Unfortunately the Albanian side, not without various external assistance, tries not only make the process  in Brussels meaningless but seeks to demonstrate that Serbs have no place neither in Kosovo nor in Metohija," the minister reiterated.

Serbia, he said, can't allow the dangerous consequences arising out of such an "irresponsible policy" nor can it agree to it.

"The latest announcements of Pristina signal that we will have very hard times ahead. Such remarks come as a clear threat to Serbs and the stability of the region.  Unfortunately there is no clear answer to such behavior neither from the international community nor from the European Union, which we expected to answer in the first place," he told Sputnik.

Former Kosovo Liberation Army Commander to Run for PM Post - Reports
The minister added that they expect the EU to make it clear that everything that has been agreed upon and signed should be observed and implemented.

Nebojsa Stefanovic said that Belgrade will further insist on the setup of the Community of Serb Municipalities,  implementation of all the agreements and observation of all the rights.

"This model is very important to Serbs as it guarantees them more security and more influence on the developments in Kosovo and in Metohija," he concluded.