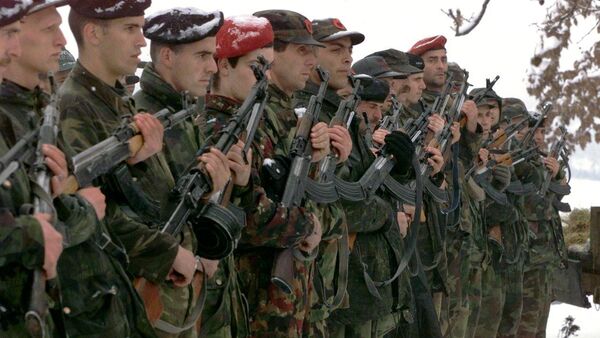 © AFP 2023 / JOEL ROBINE
Subscribe
International
India
Africa
Ramush Haradinaj, a former Kosovo Liberation Army commander from the 1998-1999 Kosovo conflict, has become a candidate for the office of the republic's prime minister ahead of the upcoming parliamentary election, local media reported on Wednesday.

BELGRADE (Sputnik) — Haradinaj, who is the leader of the Alliance for the Future of Kosovo party, will run as a candidate from a faction comprising his party, the Initiative for Kosovo and several other movements, the Radio-Television of Kosovo broadcaster reported, citing the Central Election Commission.

In early May, the Russian Foreign Ministry drew attention to "aggressive remarks" made by Haradinaj against the Serbian authorities and called them "unacceptable." According to media reports, Haradinaj's controversial statements included a promise to add some Serbian territories to Kosovo.

Was Albanian Ex-President Sending Arms to Kosovo Liberation Army Terrorists?
In January, Haradinaj was detained in France after a Serbian arrest warrant was issued, alleging that he committed war crimes during his time as a guerrilla commander. French authorities have, however, refused to extradite the Kosovar politician to Serbia.

Between 2004 and 2005, Haradinaj served as prime minister of Kosovo, a region that declared its independence from Serbia in 2008. Belgrade and Moscow among some other states don't recognized the sovereignty of Kosovo.