'Jam the Russians': US to Test Latest Electronic Warfare Gear in Europe 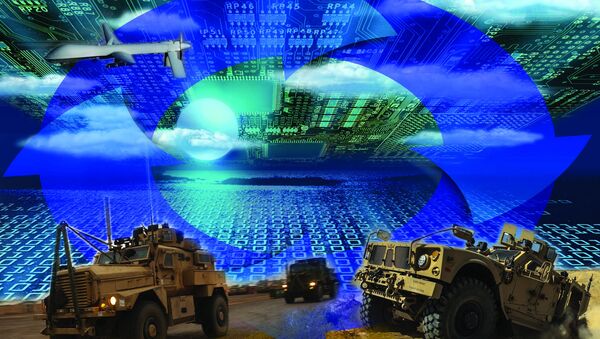 The new system will be available in both vehicle-mounted and man-portable forms for use by all types of combat brigades.

After analyzing the course of the armed conflict in eastern Ukraine, the Pentagon established the Rapid Capabilities Office in the fall of 2016 to expedite critical technologies to the US armed forces in an effort to counter Russia in the field of electronic warfare and cyber operations.

The Americans view Russia’s electronic warfare capability as a serious threat, especially given the US military’s growing emphasis on developing sea-, air- and ground-based UAVs.

The Pentagon is also wary of Russia’s clever tactical use of electronic warfare in combat situations.

Unlike their American colleagues in Iraq and Afghanistan, Russian commanders on the ground do not have to call in aviation to stage electromagnetic attacks.

They have proved that much can be done by small units, active right on the ground.

The Russian capabilities in electronic warfare are considered by US military experts as some of the most dangerous around, along with the nuclear triad and missile defense.

Of particular concern to the Pentagon is the Russian EW units’ ability to cripple the Global Positioning System (GPS) which the US armed forces rely on heavily.

Jamming the Enemy: Russia Ramps Up Production of Electronic Warfare Systems
Even worse for the Pentagon, instead of disrupting the GPS satellites’ work in orbit, they can tamper with GPS signals inside a war zone or right on the battlefield.

According to the Pentagon, the Army’s 250,000 combat control and other systems are heavily dependent on navigational support. There are an average 600 such system available in every US Army brigade and their failure during combat could have catastrophic consequences.

It is with these concerns in mind that the US is putting so much emphasis on the development of alternative GPS-based navigation systems, some of which are slated to be field-tested in 2018.

Since the start of the Russian military operation in Syria, many US military experts have repeatedly called the electronic warfare systems one of the Russian Armed Forces biggest strengths.

000000
Popular comments
Don't forget to bring your two eggs with the jam. We'll roast a breakfast ;)

klod.infobeez
18 May 2017, 12:49 GMT
000000
U.S tried the BEST Surveillance drone to Afghan. The BEAST of KANDAHAR. IRAN , took it and own it.. So now Russia will own this? U.S MATTIS told ISRAEL that ISRAEL have full access to all SECRETS U.S HAVE. Thinking about destroying Russia. MATTIS went to Israel and told them that. Russia need to wise up. Hide all that. Like Soviets did. And just counter with defense against it. They preparing for war to depose Russian government and do like in IRAQ. Russia will become a U.S COLONY that then will own, extract , process sell all resources, with DOLLARS to tax too and rule. They been thinking about getting Gorbachev back in power. Don't let LAVROV play the IDIOT at W Hoiuse. Russia need secrecy. And ULTRA secrecy . Russia is penetrated. Even the news are run by Washington now. You can see the BLAND NEWS. I mean, today IRAN have way better news than RT. And Sputnik. Why? They struggling to bring news before anyone else!!! In the past RT would had have cameras, drones etc on the Syrian Front!! With Syrian TROOPS and Russia. Even helmet cams. Today is about refute FAKE NEWS from west ONLY. Russia need to get an upper hand,.
cast235
18 May 2017, 14:54 GMT1
000000
Newsfeed
0
New firstOld first
loader
LIVE
Заголовок открываемого материала
Access to the chat has been blocked for violating the rules . You will be able to participate again through:∞. If you do not agree with the blocking, please use the feedback form
The discussion is closed. You can participate in the discussion within 24 hours after the publication of the article.
To participate in the discussion
log in or register
loader
Chats
Заголовок открываемого материала
Worldwide
InternationalEnglishEnglishMundoEspañolSpanish
Europe
DeutschlandDeutschGermanFranceFrançaisFrenchΕλλάδαΕλληνικάGreekItaliaItalianoItalianČeská republikaČeštinaCzechPolskaPolskiPolishСрбиjаСрпскиSerbianLatvijaLatviešuLatvianLietuvaLietuviųLithuanianMoldovaMoldoveneascăMoldavianБеларусьБеларускiBelarusian
Transcaucasia
ԱրմենիաՀայերենArmenianАҧсныАҧсышәалаAbkhazХуссар ИрыстонИронауОssetianსაქართველოქართულიGeorgianAzərbaycanАzərbaycancaAzerbaijani
Middle East
Sputnik عربيArabicArabicTürkiyeTürkçeTurkishSputnik ایرانPersianPersianSputnik افغانستانDariDari
Central Asia
ҚазақстанҚазақ тіліKazakhКыргызстанКыргызчаKyrgyzOʻzbekistonЎзбекчаUzbekТоҷикистонТоҷикӣTajik
East & Southeast Asia
Việt NamTiếng ViệtVietnamese日本日本語Japanese中国中文Chinese
South America
BrasilPortuguêsPortuguese
NewsfeedBreaking
00:57 GMTUS Law Enforcement Unions Decry 'Defund the Police' for Rise in Assaults on Officers - Report
00:52 GMTLabor Activists Hail ‘Striketober’ as Over 100,000 Union Workers Across US Prepare Work Stoppages
00:46 GMTUS House Committee Advances Resolution Calling for Criminal Contempt Charge Against Bannon
00:19 GMTBiden Admin. Not Seeking to Make States Choose Between Working With US or China, Blinken Says
YesterdayCENTCOM Chief, UAE Defense Brass Talk Keeping Pressure on Daesh in Iraq, Syria
YesterdayPhotographer Claims He Filmed Aliens Neutralizing Nuclear Missile Mid-Air - Report
YesterdayUS Senate Panel Advances Bill to Impose Sanctions Tied to South China Sea Issues
YesterdayOver Three-Fourths of US Republicans Want Trump to Run for President in 2024 - Poll
YesterdayBrazil's Senate Accuses Bolsonaro of Mass Homicide as Herd Immunity Policy Fails - Reports
YesterdayItalian Senate Bans Parliamentarians From Working Without Green Pass
YesterdayMalaysia’s Transgender Tycoon Nur Sajat Granted Asylum in Australia From Blasphemy Charges
YesterdayBomb Threat at US Department of Labor in DC Cleared by Federal Police
YesterdayUS Indicts Congressman for Concealing Facts, Making False Statements
YesterdayUS Stocks Extend Rally as Third Quarter Earnings Sparkle, S&P 500 Near Record High
Yesterday‘We Really Need a Wake-Up Call,’ Rep. Gallagher Says on China’s Defense Advancements
YesterdayFBI Seen Taking Out Boxes From NYC House Allegedly Linked to Russian Billionaire Deripaska
YesterdayTed Cruz Says Biden's Cages for Migrants 'Bigger', 'More Full' Than Ever While No Democrat 'Cares'
YesterdayColin Powell, Moral Weakling
YesterdayAustralian Intelligence Chief Says Espionage Soon to Overtake Terrorism Threat
YesterdaySpain's Prado Museum Reeling From Unprecedented Protest by Victims of Mass Poisoning