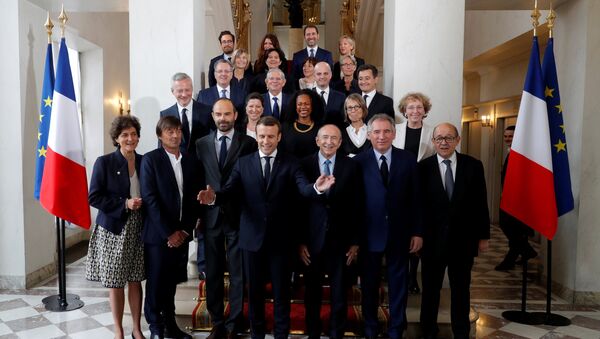 Certain politicians may lose some of their importance but it does not mean the French government has opted for with hunting, according to its spokesman.

PARIS (Sputnik) — The reform of the French political life is not a kind of purge, but the importance of some politicians may have to be diminished to strengthen the position of the central administration, government spokesman Christophe Castaner said Thursday, following the first meeting of the new cabinet.

"Do we look like people who will go into witch hunting? The change of political line is underway, so the ministers have to be able to evaluate the existing practices. It can be a negative evaluation. But if the role of the certain politicians has to be diminished in order to reinforce the role of the central administration, it will be done," Castaner told reporters, when asked about the consequences of political renovation.

This is What Putin and Macron Discuss in Their First Phone Talks
According to the spokesman, "social dialogue renovation" was a priority and the text of the project would be published before June parliamentary election.

Castaner added that any access restrictions imposed on the press stemmed from the fact that the presence of reporters and cameras complicated "an efficient dialogue with the people" and was not an attempt to control the media.

The spokesman also said that supporting the presidential majority was a common goal shared by all new ministers, coming from opposite camps of the political spectrum

"The ministers do not have to lead the election campaign. But all of them are the activists of the presidential majority. That must be a common goal for everybody, prevailing over our personal expectations, that's the responsibility we took when we took the ministerial chairs," Castaner said.

The composition of the new government was announced on Wednesday, following Monday announcement of the appointment of Edouard Philippe as prime minister.