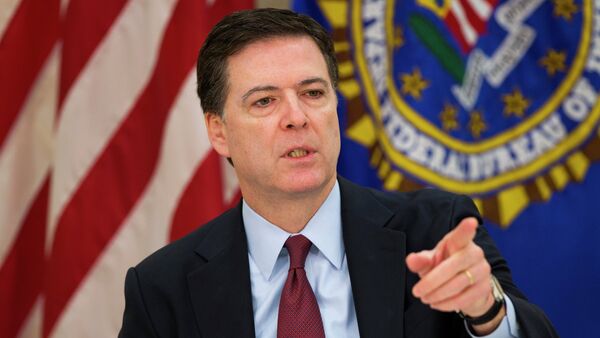 The president alluded to such "tapes" in a tweet shortly after Comey's dismissal, when he said the former director had "better hope that there are no ‘tapes' of our conversations," should Comey start telling the press about the White House and why he got the axe.

WikiLeaks provided a link to its online submission form in the tweet and in subsequent tweets told followers they could help increase the award by sending money to a reward account.

Comey was summarily sacked Tuesday evening, in a move Trump first described as following advice from his Justice Department, but later said had long been planned. He blamed Comey's media-hungry style, calling him a "showboat" and a "grandstander," and claimed his handling of the investigations into former Secretary of State Hillary Clinton's use of a private email server had left the FBI in turmoil.

Speculation raged after Comey's dismissal, however, with many suggesting that by firing the FBI chief, Trump was attempting to obstruct the ongoing probe into his campaign's connections to Russian business and government figures.

Others, citing Comey associates, said the former FBI chief had declined to pledge a personal oath of loyalty to the president during a private dinner shortly after the inauguration, and this "disloyalty" is what caused him to be dismissed. It is this that Trump's Friday morning tweet is believe to allude to.

Critics have said that Trump's tweet amounts to witness intimidation, as Comey may be called to testify regarding Trump's alleged Russia ties.

Trump is known to tape congressional hearings to listen to later, though it is not known whether recordings of his private conversations, including this one, exist.

Julian Assange, WikiLeaks founder, was also quick to offer Comey a new role at the whistleblowing organization, saying "Working for WikiLeaks is fulfilling."

FBI directors in general serve a term of 10 years, in order to keep them separate from the four-year presidential cycle in the US. Comey had more than six years to go in his term.

The president said Saturday that he would move quickly to name a new FBI director, and is believed to be seriously interviewing four candidates.