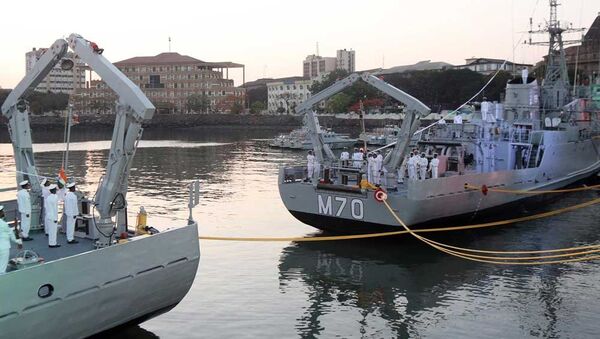 © Photo : indiannavy twitter
Subscribe
With just four minesweepers out of the 24 required to secure its region from minefields, the Indian Navy is in dire straits with the existing four also due to be decommissioned next year without any news of any induction of new minesweepers.

Chinese Newspaper Says India’s Fears of Beijing’s Military Build-Up Exaggerated
New Delhi (Sputnik) — The Navy recently decommissioned two minesweepers ships, INS Karwar and INS Kakinada. It has left for only four minesweepers against the requirement of at least 24 minesweepers to secure its region from minefields.

The Navy expressed its concern to the Ministry of Defense on this issue during the four-day long Naval Commanders' Conference which ended concluded on May 5, wherein the "top-level leadership of the Navy reviewed readiness to deploy over the entire range of missions in the maritime domain".

By the end of next year, the Indian Navy would have decommissioned all its existing minesweepers, without new inductions.

"This is certainly a cause for concern for India's maritime security, particularly considering the increasing operational deployments of Chinese submarines in the Indian Ocean Region. It is well known that the stealth attribute of submarines makes them the most appropriate platforms for laying an offensive minefield in the enemy's littoral waters," Naval Captain Gurpreet S. Khurana, Executive Director, National Maritime Foundation (NMF), said.

Indian Submariners Complete Training to Run Scorpene Class Submarines
Indian Navy chief Admiral Sunil Lanba emphasized the need for continued efforts to modernize and expand the Navy's operational footprint so as to be a stabilizing force in Indian Ocean Region.

Arun Jaitley, the Indian Defense Minister, has assured the Indian Navy that due impetus through appropriate defense procurement policies is being given to make good the critical capability shortfalls, such as Mine Counter Measure Vessels (MCMVs). If government reaches an agreement to build 12 new MCMVs with South Korean company Kangnam Corporation at Goa Shipyard, it is unlikely that the delivery of the first MCMVs will be done before 2021. This means that the Indian Navy will have to cope without any MCMVs for more than three years.

India had bought six MCMVs from the erstwhile Soviet Union in the 1970s. Last year, the Indian government agreed to build 12 new MCMVs with the South Korean collaboration at Goa Shipyard. The Indian Navy needs at least 24 MCMVs to plug the shortfall. On the other hand, China has more than 100 minesweepers and MCMVs.