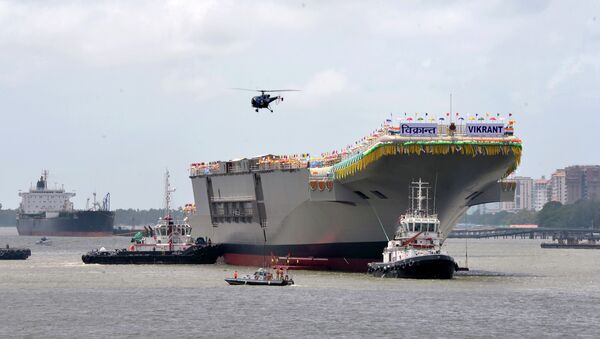 India shouldn’t “overly interpret” Beijing’s military development or big-ticket projects as encircling the country, an article published in China’s state-run Global Times on May 7 said. Experts said China’s military build-up is aimed more at the US than India and New Delhi should focus on its own goals.

India Allows Civilian Flights to Land at Military Airports Along China Border
New Delhi (Sputnik) — The Global Times’ article came after Indian Army chief General Bipin Rawat said that the country should work to encircle its adversaries. He suggested that India should build closer ties with Iran, Iraq and Afghanistan to achieve this objective.

To this, the Global Times responded: “China advocates peaceful development and it has and will never seek hegemony in the region… Beijing’s military development is part of its national construction, and New Delhi should not overly interpret it.” It also said that India can’t match China’s military spending and capability even if scales up its defense budget. It cited the slow development of the Indian aircraft carrier project, despite an early start as one such example.

The Global Times also urged India to adopt a pragmatic attitude towards China’s and Pakistan’s development and use the Belt and Road initiative to fulfill its ambition to become an influential economic power in the region.

India Conducts Joint Military Exercise With China
Experts differed in their interpretation of China’s military build-up and its impact on the regional power balance in South Asia and Asia, especially in the context of the recent launch of Shandong aircraft carrier by the People’s Liberation Navy.

“We are over-concerned with the Chinese Navy’s plans being aimed at India. They are more aimed at the US and maintaining dominance in the South China Sea and East Asia. Also, if you actually look at their weapons acquisition and defense spending, it has grown very slow over all these years and geared more towards maintaining minimum deterrence. China has so far focused on economic growth and even these initiatives are for providing security to their mega-economic and trade route projects,” Deep K. Datta-Ray, Associate Professor at the New Delhi-based O.P. Jindal International University, told Sputnik.

“Shandong will give China an edge for the first time in the carrier race with its Asian rival, a literal two-to-one advantage,” Bloomberg’s Mihir Sharma recently wrote.

However, Yusuf Unjhawala holds the view that Chinese navy’s superiority is over-hyped in the current context. He wrote in Livemint that both of China’s aircraft carriers (Shandong and Liaoning) “are not [in] operational deployment yet” while India’s Russian-built INS Vikramaditya is “fully operational”. Further, “India has decades of experience in operating aircraft carriers, it has used them in warfare.”

It is, however, India’s strategic location at key choke points which gives it an advantage over China, said Unjhawala. The Andaman and Nicobar Islands with India’s only tri-services command is located close to the choke point of Malacca Strait. Moreover, the Indian mainland too is favorably located and provides Indian the access to the Indian Ocean.

In the event of a conflict, the presence of the US naval fleet in the Pacific and the Indian Oceans along with the presence of stronger Japanese and Australian navies can complicate things for China.