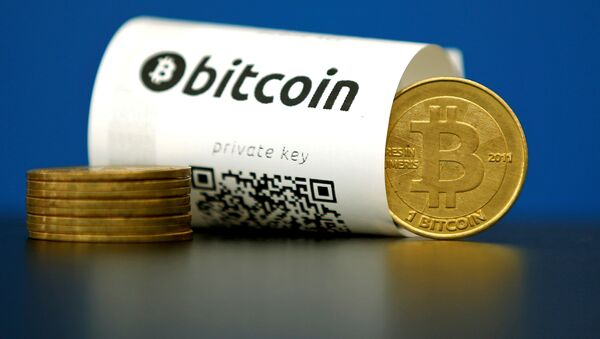 Cryptocurrencies are gaining in value because many see them as a new type of digital investment that has advantages over the US dollar or even gold, Economic Historian Dr. Garrick Hileman told Radio Sputnik.

The price of Bitcoin was soaring to new highs during trading last week, amid an upsurge in demand. According to the CoinDesk Bitcoin Price Index (BPI), it broke through the $1,500 barrier for the first time on Thursday; trading on Saturday has reached $1,550 so far.

Since reaching $1,000 at the turn of the year, the cryptocurrency has surged in recent months and added over 20 percent of value during April alone.

The steep rise in price has led some analysts to wonder whether Bitcoin, which was invented in 2009 and broke the $100 barrier in 2013, is heading for a second wave of price growth as new money enters the market.

Cryptocurrencies expert Dr. Garrick Hileman, who is an Economic Historian at Cambridge University and the LSE, as well as founder of the macroeconomic news website Macro Digest, told Radio Sputnik that all cryptocurrencies, not just bitcoin, are gaining in popularity.

"Three years ago when Bitcoin crossed $1,000, there were still a lot of other cryptocurrencies but Bitcoin represented 90 percent of the total market capitalization of all cryptocurrencies. Today, it's just over 50 percent so there's a broader story going on beyond Bitcoin," Hileman said.

‘Like a Game’: Bitcoin Use for Sex Industry Heats Up in Sin City
Bitcoin's steep price increase has caught the headlines but other blockchain platforms have been gaining in price at an even higher rate. For example, the blockchain Ethereum, which offers native support for automated "smart contracts," is now worth $7 billion.

While cryptocurrencies are being used for more and more tasks, such as cross-border payments or online transactions, financial speculation is still the source of most demand.

"Most people would agree that cryptocurrency today is still considered primarily a speculative instrument, a stored value. It's a bet on people needing cryptocurrency to do things like power the 'internet of things' economy and machine to machine transactions."

"We don't know how big that segment of the economy is going to be, but a lot of people think that something like Bitcoin or Ethereum or one of these other currencies could be the payment rail for a machine-to-machine economy," Hileman explained.

The idea of bitcoin and other cryptocurrencies being used as a kind of digital gold, an alternative way of storing money outside of traditional banks and currencies, is also gaining in acceptance.

"More and more people are waking up to cryptocurrency as an alternative to something like the US dollar as a traditional way to opt-out of your national currency."

Russia
Gold Bugs: Why Russia is Stacking Bullion Bricks Like There's No Tomorrow
However, investors in virtual currency should be aware that since there is no national or international regulation of bitcoin, buyers can be the victims of theft or fraud. In addition, the price is very volatile and could end up sky-high – or zero.

"These are incredibly volatile instruments, there's no government or central bank standing behind them to help try to regulate the exchange rate."

"Yet, cryptocurrencies like bitcoin offer a number of advantages over gold. They are a lot easier to store, in some ways they are certainly easier to send to someone else around the world, they may be even more convenient to acquire. So, if cryptocurrency is becoming a new kind of digital gold, a new commodity, then really the sky could be the limit on the price."