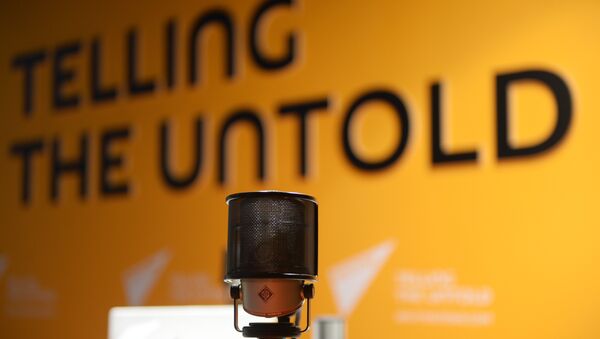 MOSCOW (Sputnik) — On Thursday, Macron filed a legal complaint, not targeting any specific party, over allegations that he owned an offshore bank account in the Bahamas. The EM! campaign later issued a statement saying Sputnik and RT had "actively" relayed claims made online and repeated by Macron's right-wing rival Marine Le Pen of Macron having bank accounts in the Bahamas.

"The allusion to Sputnik and RT by the Macron campaign in the context of this investigation is absolutely groundless. It is a perfect example of a fabrication aimed at undermining trust among readers. When Mr Macron’s movement released the statement alleging Sputnik’s involvement in ‘actively spreading’ the information, Sputnik had published only two articles, both based on EM! public statements," Sputnik said in a statement.

Sputnik has published two stories on the offshore allegations. The first covered Macron's rebuttal of the allegations, while the second reported on the complaint filed by his party. The EM! campaign did not respond to an inquiry by Sputnik about the reasons for professing the accusations. Sputnik will seek legal advice following continuous false accusation by Macron's party.

'Macron Has Cold Eyes': Brigitte Bardot Calls on Animal Lovers to Vote Le Pen
Speculations of Macron's offshore accounts have been circulating in the social media networks for some time, with the candidate repeatedly refuting the rumors. On Wednesday, similar allegations were made by right-wing candidate Marine Le Pen during a heated two-hour TV-debate with Macron. Le Pen's words triggered a sharp response from En Marche!, with the party stating that this maneuver would have legal consequences under the French defamation laws.

Le Pen said in an interview with the BFM TV channel that she did not have any proof to substantiate her claims as this would be a court matter if she did. French prosecutors have, however, opened an inquiry into the suspected spreading of disinformation aimed at disrupting the voting process.

Macron and Le Pen became the two top contenders in the first round of the French presidential election, and are set to face each other in the run-off on Sunday. Polls indicate that Macron is around 20 percentage points ahead of Le Pen.