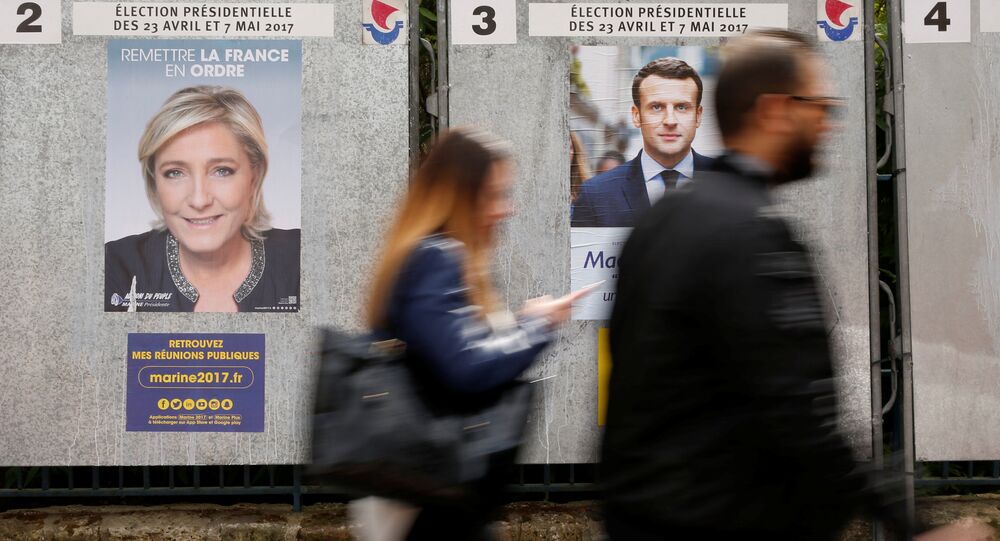 In the second round of France's presidential elections, National Front candidate Marine Le Pen is likely to face a pooling of support similar to that which her party faced following a first round victory in 2002 and regional elections in 2015, expert in French politics Dr. Pierre Haroche told Radio Sputnik.

The results of the first round of voting in France's presidential elections don't come as a surprise and appear to suggest that En Marche! candidate Emmanuel Macron will win the second round comfortably, Dr. Pierre Haroche, an expert in French politics from King's College London, told Radio Sputnik.

"The margin is quite tight, but since Le Pen is quite isolated it will be very difficult for her to win," Haroche said.

Unlike the recent US elections or the UK's Brexit referendum, the first round results confirmed opinion polls held on the eve of the election.

An Ifor poll conducted April 23-24 predicts that in the second round of voting, which will take place May 7, Macron will win 60 percent of the vote and Le Pen 40 percent.

© AFP 2021 / Thomas SAMSON
Where is the Love? Trump Praises Le Pen, But She’s 'Saddened' by His Bombs
Macron looks set to command a large lead over Le Pen because he holds a centrist position, which "facilitates support from both left and right wing voters who want to beat Le Pen," Haroche said.

For the first time since the establishment of France's Fifth Republic in 1958, which allowed for the direct election of the President and strengthened the powers of the office, there is no representative of the main center-left or center-right parties in the second round.

"I think it's virtually the end of the Fifth Republic, this regime dominated by a strong President with a strong party and a strong parliamentary majority. Maybe we'll have a weakening of the position of the President and more post-election coalition negotiations to form a government."

Socialist Party candidate Benoit Hamon received an underwhelming 6.4 percent and the candidate from Les Republicains, Francois Fillon, received 20 percent. Hamon and Fillon have both called on their followers to support Macron in the second round in order to defeat Le Pen.

"It's a major problem (that) she doesn't have an alliance. But I don't think that these official positions really matter. There is a strong tradition in the French electorate to form this so-called 'Republican Front,' a coalition of voters against the National Front."

"I think that could happen again this time, as it did in 2002 but also in regional elections in 2015, when the National Front came first in the first round and eventually failed to win any region. So, there is an important tradition in the electorate to do that."

"Actually, they (National Front) may secure a few seats in the coming legislative election. The legislative election will be very interesting, because usually the electorate just gives a parliamentary majority to the elected President, but this time neither Le Pen nor Macron has a strong parliamentary party so the next National Assembly may be divided," Haroche said.

"Maybe in these areas where the National Front is particularly strong, particularly in the south, or in the north, they may have some parliamentary seats."

Le Pen Has 'Reserve' of Votes From Other Candidates' Voters at Run-Off - FN Rep.