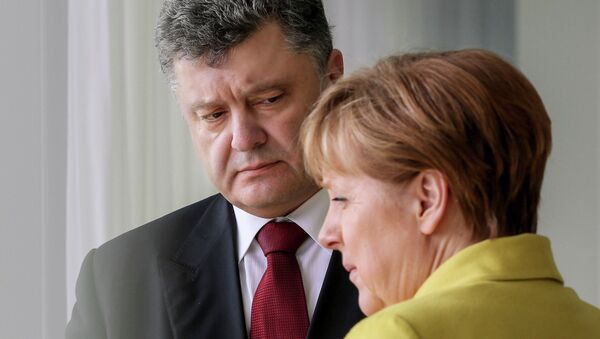 The encouragement provided to Ukraine for its uncertain EU prospects by both the EU and Germany under Chancellor Angela Merkel is preventing the full implementation of the Minsk agreements on Ukrainian reconciliation, Beatrix von Storch, a member of the European Parliament for Germany's right-wing Alternative for Germany (AfD) party, told Sputnik.

BERLIN (Sputnik) — The German chancellor paid an official visit to Kiev in late January followed by a bilateral meeting with Ukrainian President Petro Poroshenko in late March in Malta, where Merkel stressed Ukraine's importance for Europe. During the early April phone conversation between Merkel, Poroshenko, and French President Francois Hollande, the European Union leaders expressed their support regarding the introduction of a visa-free regime for Ukrainians.

"The EU is enabling Ukraine to refrain from fully implementing the Minsk agreements. Both the EU and Ukraine know that if Minsk II was fully implemented, the autonomy it provides to the Donetsk and Lugansk Oblasts [regions] would hinder Ukraine's continued integration in the West. Implementation of the Minsk agreements cannot be achieved as long as Merkel continues to implicitly dangle the ever so feint prospect of EU membership to Ukraine," von Storch said.

Germans Break Ukraine Blockade to Bring Humanitarian Aid for People of Donbass
According to the lawmaker, the EU-Ukraine association agreement, as well as Kiev's recent visa liberalization "feed into this delusion" that the European Union is Kiev’s "protector and caretaker."

Commenting on the Tuesday's meeting between Merkel and Russian President Vladimir Putin, during which the leaders vowed to maintain a dialogue despite current political troubles, Von Storch said she remained "skeptical that Merkel aims at genuine extensive dialogue."

"We must not only speak but listen. Russia has made very clear how it regards the continued expansion of the EU and NATO within its near abroad. Ukraine is of significant geo-political importance to Russia. If Merkel truly listened then Russia’s interests would be respected and this conflict would never have started in the first place," the lawmaker noted.

Russia to Lend Its Shoulder to De-Electrified Lugansk Republic in Spite of Kiev
In February 2015, Kiev forces and Donbass independence supporters signed a peace agreement in the Belarusian capital of Minsk. The deal stipulates a full ceasefire, weapons withdrawal from the line of contact in Donbass, as well as constitutional reforms that would give a special status to the Donetsk and Lugansk People's Republics. Despite the agreement brokered by the Normandy Four states (Russia, France, Germany and Ukraine), the ceasefire regime is regularly violated, with both sides accusing each other of multiple breaches, undermining the terms of the accord.

Germany was among the most active supporters of the European Union’s sectoral sanctions against Russia over the reunification of Crimea with Russia and Moscow's alleged involvement in destabilizing the situation in Ukraine, which the Russian authorities have denied.