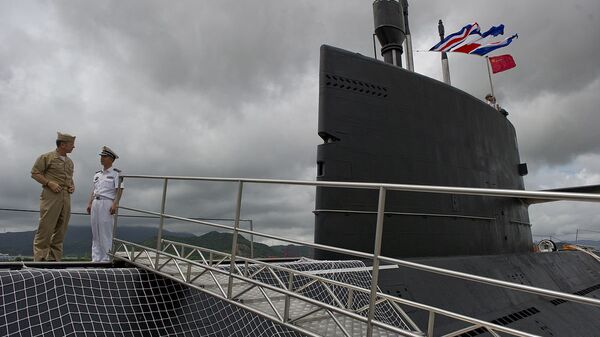 © Photo : Chairman of the Joint Chiefs of Staff
Subscribe

Thailand and China have signed a contract on the delivery of the first of three submarines that Thailand's naval forces plan to purchase from Beijing over the course of the next 11 years, media reported Friday.

BANGKOK (Sputnik) — According to the Bangkok Post newspaper, the representatives of the Royal Thai Navy and Chinese state enterprise China Shipbuilding & Offshore International Co (CSOC) signed the document in Beijing. China introduced no changes to the version of the contract, which was edited by the Thai attorney-general, the daily added.

Thailand to Investigate Government-Planned Purchase of Chinese Submarines
Under the contract, Thailand will buy three Yuan Class S26T submarines worth a total of around 36 billion baht ($1 billion), with 700 million baht ($20.2 million) due to be paid within 45 days. The first submarine is expected to be delivered within six years. China also agreed to provide CM-708 missiles, which can be fired from the submarine over a range of 290 kilometers (180 miles), free of charge.

On April 18, Thailand’s cabinet of ministers approved, in secrecy, the decision to acquire a 13.5 billion baht ($390 million) submarine from China and two more over the next 11 years. As a result, a large number of activists, politicians and members of society raised concerns over the impact of the submarine purchases on the national economy and defense budget, as the deal may deprive the country of its military budget in case of emergencies, while the expediency of the submarines in general were also questioned. On April 28, local media reported that Thailand’s Office of the Auditor-General (OAG) decided to launch a probe into the Royal Thai Navy’s plans to purchase three submarines from China due to the strong criticism which came after the deal was struck upon the petition of one of the activists.