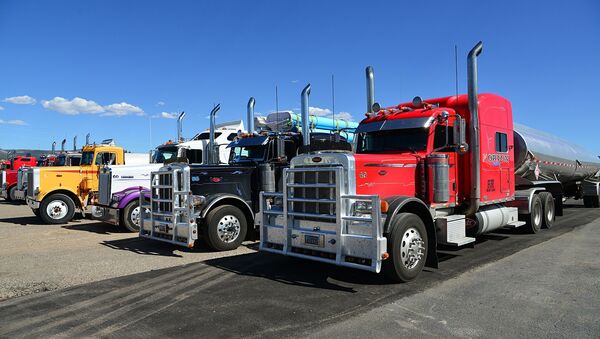 © Photo : Pixabay
Subscribe
International
India
Africa
The Transportation Security Administration (TSA) has issued a report warning truck owners and renters to be “vigilant” against the threat of terrorists trying to use their vehicles to carry out “ramming attacks,” in which trucks are used as a brutal weapon against crowds of people.

"No community, large or small, rural or urban, is immune to attacks of this kind by organized or 'lone wolf' terrorists," claimed the report, which was obtained by NBC News.

The report warned owners, operators and renters that their vehicles could be weaponized. Particularly vulnerable are places where "large numbers of people congregate, including parades and other celebratory gatherings, sporting events, entertainment venues or shopping centers."

"Commercial vehicles — distinguished by their large size, weight and carrying capacity — present an especially attractive mechanism for vehicle ramming attacks because of the ease with which they can penetrate security barriers and the large-scale damage they can inflict on people and infrastructure," the report read.

There was also the Ohio State University attack in November 2016 which injured 13, the highest-profile incident in the United States, but the only casualty from that was perpetrator Abdul Razak Ali Artan.

Many incidents were not terrorist in nature, such as the Melbourne Attack in January which claimed six lives. The perpetrator, Jimmy Gargasoulas, had known mental health issues and violent tendencies but is not believed to be a terrorist.

The majority of those killed come from two incidents: the July 2016 Bastille Day attack in Nice, France, when a lone Islamic terrorist plowed through pedestrians with a commercial truck, killing 87, and the May 2014 Ürümqi attack in Xinjiang, China, when two SUVs driven by four Islamic terrorists killed 43. These casualties count both include the perpetrators, who died during the incidents.

The attacks are most common in France and Israel, with five and four of the incidents occurring in those nations, respectively. Three have occurred in Germany and two in the United States.

The jump in frequency seems to have followed a September 2014 proclamation from Abu Mohammed al-Adnani, a Daesh spokesman and senior leader, that told jihadis to kill Westerners with whatever tools were available. "Smash his head with a rock, or slaughter him with a knife, or run him over with your car," said al-Adnani, who was killed in a May 2016 airstrike.