Takes Ball, Goes Home: Trump Urges Gov’t Shutdown After Not Getting His Way 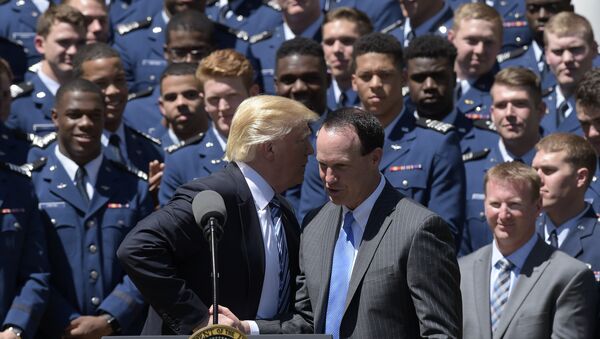 © AP Photo / Susan Walsh
Subscribe
In another in the seemingly endless series of absurdist, irrational and sporadically mind-bendingly ignorant tweets, US President Donald Trump has stated that he believes that the American government is in need of a “good shutdown.”

US Government-Funded News Outlet Touts Ivanka Trump’s New Book
On Tuesday, the US president, like millions of Western teenagers, continued with his habit of using social media as his preferred platform for self-expression, declaiming that since his administration has continually failed at getting any significant legislation passed, if he can't get what he wants, he'll simply shut down the game.

As in a majority of his late-night tweets, Trump was reacting to news he didn't like, in this case tepid support from fellow Republicans for a spending bill passed this week to keep the US government functioning.

The spending bill included many items that Trump and his administration previously avowed would never happen, including increased funding for sanctuary cities, Planned Parenthood and science resources.

Trump did get some monies to improve border infrastructure but was forced to drop his demand for funds to support his deeply held campaign pledge to build a wall along the entire 2000-mile length of the Mexico/US border — at the expense of Mexico, of course.

Following the vote, the president was nonetheless undaunted by the reality of his rapidly diminishing support base on Capitol Hill, remarking that even though his border wall was being shelved for now, he would consider the monies earmarked for border infrastructure as a "down payment" on his wall.

Trump's current approval rating is hovering at just under 40 percent, the lowest figure for a newly elected president since Gallup began measuring the statistic.

The diving approval numbers are causing alarm within his camp of supporters, as well. "You can't govern this country with a 40 percent approval rate. You just can't," said former Trump advisor and senior Heritage Foundation economist Stephen Moore, according to the New Yorker.