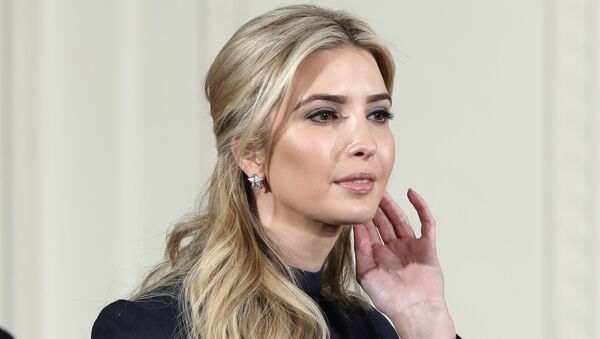 Ivanka Trump’s conflicts of interest, bridging her private sector interests and her public service obligations, have been exposed again — it isn’t the first time, and likely will not be the last.

Remember when the US Department of State pushed news posts on Mar-a-Lago, where owner Donald Trump has doubled membership initiation fees to $200,000 since becoming president?

Department of (E)state: Why Are US Gov’t Websites Promoting Trump’s Mar-a-Lago?

On Tuesday, US state-funded news outlet Voice of America ran a piece on Ivanka Trump’s second book, published Tuesday, in which the first daughter has apparently “gone from sassy to serious” with precious tips for women in the workplace.

The AP story, which VOA published, distills gem-worthy insights from the first daughter, including “work smarter, not harder,” and that setting “healthier boundaries” for herself helps her live a “full” life. Other nuggets of wisdom for the 35-year-old proclaim the need to “unplug” from electronics and “devote that time” to her husband, Jared Kushner, who is also playing an advisory role in the White House.

If a state-run news agency polishing Ivanka’s image weren’t enough, what about the fact that it may help her book sales, thus lining her pockets while she toils as a “public servant” in the White House? As the United States Office of Government Ethics penned in a letter last week, “the primary criminal conflict of interest statute prohibits Ms. Trump from participating in particular matters affecting her financial interests.”

That same letter went on to point out that “that conflict of interest statute also covers her spouse’s financial interests, which are imputed to her.”

Lo and behold, on Tuesday a new report emerged revealing that Kushner failed to disclose a slew of financial dealings with Goldman Sachs, George Soros and Peter Thiel. Further, Kushner never mentioned that he personally has more than $1 billion in outstanding loans on his books from more than 20 lenders.

In addition to single-handedly solving the Israel-Palestine conflict, Kushner was tapped for roles in the White House including heading the Office of American Innovation, spearheading negotiations with China, improving ties with Mexico, reforming the criminal justice system, and directing the newly-created American Technology Council.

According to the OGE letter, the potentially criminal infraction of using influence within the White House to curry favors with businesses and world leaders would fall on Ivanka’s shoulders, too, should Kushner ever stoop to such levels of behavior.

Trump’s book, “Women Who Work,” includes information about the non-profit group Girls Who Code. When CEO Reshma Saujani discovered that Trump had used her story in the self-help book, she demanded on Twitter that it be retracted, unless “you are going to stop being #complicit” in President Donald Trump’s agenda.

A spokeswoman for Saujani declined to comment on whether she will be pursuing legal recourse against Trump.