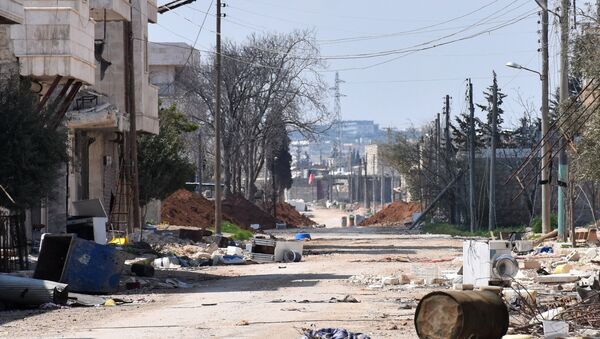 Russian President Vladimir Putin and Turkish President Recep Tayyip Erdogan held a joint press conference in the Black Sea resort of Sochi on Wednesday, May 3. The two leaders previously discussed a series of issues over Russian-Turkish bilateral relations as well as the ongoing Syrian conflict.

Russian President Putin started off by saying that the period of recovery in Russia-Turkish relations after the crisis is over, and both countries are determined to strengthen multifaceted bilateral cooperation. Mutual trade with Turkey has stopped falling, Putin said, and it is recovering now.

The two leaders discussed the limitations and barriers impeding trade and investment, Putin said. The prospects of national currency use were on the table as well.

Putin then announced that Russia will launch a mutual investment fund with Turkey of up to $1 billion. Russia will also invest $22 billion in the construction of Turkey's Akkuyu Nuclear Power Plant, Putin revealed.

Touching upon the issue of the Syrian crisis, Putin said that the two countries will continue inter-agency consultations on counter-terrorism measures.

"We have agreed to strengthen cooperation in this area [counterterrorism] through the special services and ministries of defense. In particular, to continue the practice of regularly conducting inter-agency consultations on counterterrorism," Putin said following the meeting with Turkish counterpart Recep Tayyip Erdogan.

Erdogan then took the floor, promising that the results of his talks with Putin 'will be visible' in a few days.

"Undoubtedly, we will talk about Syria, we will hold meetings regarding the resolution of this issue, we will work in order to resolve this issue. Putin also expressed sincere desire to end this drama. He personally put a lot of effort and I believe he will put more in order to implement the cessation of hostilities," Erdogan said.

'Two Halves of an Apple': Russia and Turkey Usher in New Era of Relations
Erdogan then said that Turkey will not allow the formation of units threatening its national security on the border with Syria: "The eradication of terrorist organizations is our common responsibility. We will not allow the formation on our southern borders of enemy units that will threaten our territorial integrity and the security of our country."

Syria talks in Astana should consolidate ceasefire, but some participants are sabotaging this process, Erdogan said: "As guarantor states, we must approach this issue very sensitively. Thanks to the meetings in Astana, at our earliest opportunity, we must strengthen this ceasefire. But some others spend their energy to sabotage this process." He also stressed that both he and Putin insist that those guilty of the chemical incident in Syria's Khan Shaykhun must be punished.

Erdogan said that Russia is doing everything to stop the suffering in Syria.

"We are standing beside our Russian friends in the fight against terrorist organizations," Erdogan told reporters, adding that "terror does not recognize borders": "There is no distinction between acts of terrorism in Moscow, Istanbul, Brussels, Kabul or Paris. <…> Terrorist organizations are common enemies of mankind, regardless of their name, ideology."

Replying to a reporter's question about the formation of so-called safe zones in Syria, Erdogan said that he has discussed de-escalation zones in Syria with Putin.

"Mr. President and I discussed this issue today, and this issue is one of the main topics for discussions during the Astana process… I hope that the de-escalation zone will be taken as a decision, and will be put in motion for a further resolution of the issue," Erdogan said told the reporters.

Erdogan also said he hopes that Idlib region will continue to be protected as a "no-clash zone."

Russia Proposes Creation of Four Zones of Reduction of Tension in Syria
Creation of safe zones in Syria will strengthen ceasefire regime, Putin said, replying to that question. He also said that he had discussed this issue with the US President Trump: "Yesterday, we discussed this issue by phone with Mr. Trump. As far as I understand, the US administration supports these ideas."

"Russia held preliminary consultations with both Damascus and Tehran. We all believe that mechanisms which would guarantee the halt of bloodshed need to be created. And that would create conditions for the beginning of political dialogue," Putin told the press conference.

He then said that both Russia and Turkey assume that the participants of Astana talks will make the final decision to establish security zones in Syria.

"Our positions with Turkish President [Recep Tayyip Erdogan] completely coincide, we proceed from the fact that the participants in the conflict that gathered in Astana today will make a final decision. Because ultimately, it depends on them what the fate of their own country will be," the Russian leader said. "We, for our part, as guarantors of the ceasefire, Turkey, Iran, Russia, will do our best to improve these mechanisms and make them effective. We support this proposal."

"One of the ways to consolidate the ceasefire regime is the establishment of safe zones or de-escalation zones," Putin said.

Putin also said that the creation of security zones will not stop the counterterrorism fight in Syria: "As far as terrorists are concerned, that despite the establishment of these zones, the fight against terrorism will continue with the organizations like the Nusra Front and Daesh [Islamic State, both groups banned in Russia] and such, with those included on the UN-approved list of terrorist organizations."

Putin pointed out that the key condition for banning aviation operations in these zones would be a complete halt to all military activity there.

"How to monitor compliance with the relevant regime in these zones is a matter of separate talks," Putin concluded.

The political process in Syria should ultimately lead to the restoration of the country's territorial integrity, Putin said.

"This political process should ultimately lead to the full restoration of the country's territorial integrity and a single leadership of the country irrespective of the political views harbored by any given political force today," Putin stressed.