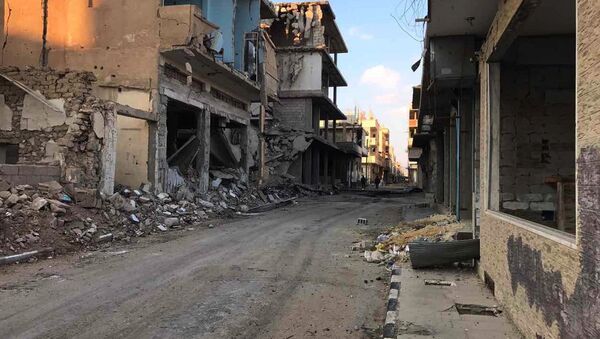 Russian proposals on de-escalation in Syria envisage the creation of four zones of reduction of tensions in the country, with safety lines along them with checkpoints and monitoring centers, paper with Russian proposals, given to opposition members and seen by Sputnik, reads.

ASTANA (Sputnik) —  The warring parties would not be able to use any weapons in these zones.

"Russia proposes creating four zones of reduction of tensions in Syria: in Idlib province, north of the city of Homs, in Eastern Ghouta and in the south of Syria," the paper reads.

The paper emphasizes the necessary to create conditions to drive out Daesh and Jabhat al-Nusra terrorist organizations (both outlawed in numerous countries) from de-escalation zones with the help of the Syrian opposition.

Russia also proposed "creating safety lines along all the borders of the de-escalation zones in order to avoid direct fire between the sides of the Syrian conflict," the paper reads.

Such lines would require checkpoints for the entrance of civilians without weapons and humanitarian deliveries, as well as monitoring centers to control ceasefire regime.

The guarantor states would have to create conditions in de-escalation zones in which the warring sides would allow a safe return home to refugees and internally displaced persons, according to the paper.

"For solving logistical issues, guarantor states need to create a joint working group for de-escalation, at the level of designated representatives…. The working group will have to present maps with de-escalation zones borders and work plan proposals… as soon as possible, " the paper reads.