Kremlin Reveals What Putin, Trump Discussed Over the Phone 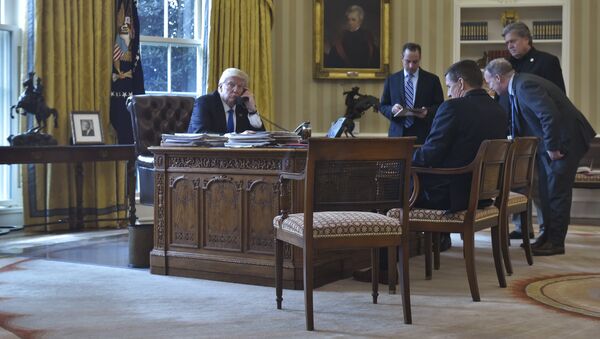 The sides focused on the prospect of coordinating the actions of Russia and the US in the fight against terrorism in the context of Syria, the Kremlin's press service said on Tuesday.

"On May 2, Vladimir Putin had a telephone conversation with US President Donald Trump. They discussed a number of important issues of cooperation between the two countries in the international arena. They concentrated on the prospect of coordinating the actions of Russia and the United States in the fight against international terrorism in the context of the Syrian crisis," the Kremlin press service stated.

During the conversation, Putin and Trump agreed to "intensify the dialogue between the heads of foreign affairs agencies of the two countries to find options that would allow consolidating the ceasefire regime, to make it stable and put it under control".

"The goal is to create conditions to launch a real settlement process in Syria. It means that the Russian Foreign Minister and the US Secretary of State will promptly inform the leaders about the progress achieved in this direction," the report says.

According to the Kremlin press service, the presidents agreed to schedule a meeting on the sidelines the G20 summit in Hamburg in July.

"Vladimir Putin and Donald Trump expressed support for the continuation of contacts over the phone, as well as in favor of organizing a personal meeting on the sidelines of the G20 summit in Hamburg on July 7-8," the press service said.

Russian President Vladimir Putin and his US counterpart Donald Trump in phone talks on Tuesday discussed tensions arising from North Korea's nuclear and ballistic missile programs and agreed to coordinate on the issue, the Kremlin added.

"The situation on the Korean peninsula was discussed in detail. Vladimir Putin called for restraint and to defuse tensions," the Kremlin's press service said in a statement.

The leaders agreed to coordinate efforts aimed at settling the issue via diplomatic means, the statement added.