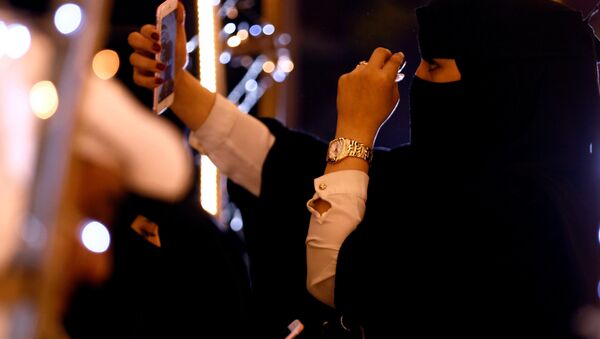 © REUTERS / FAISAL Al NASSER
Subscribe
Saudi Arabia, widely regarded as one of the worst countries to be a woman, has been elected to a United Nations Commission, dedicated to the promotion of gender equality and the empowerment of women. An expert has told Sputnik the move will likely be motivated by financial concerns - namely Western governments wanting Saudi money.

Hilel Neuer, Executive Director of UN Watch, perhaps best summed up the Kingdom's elevation to the commission when he compared the move to "making an arsonist into the town fire chief."

"Saudi women are not oppressed. It's not Norway's problem that Saudi women cannot drive."
Saudi ambassador to Norwayhttps://t.co/wSyyhogLHY

​Saudi Arabia's woeful treatment of women isn't a matter of opinion — bodies and think tanks have consistently graded the country near or at the very bottom in international rankings for gender equality — the World Economic Forum's Global Gender Gap report for 2016 placed it 141 out of 144.

What accounts for its lowly performance?

Dr. Richard Wellings, Research Director at the Institute of Economic Affairs, notes Saudi women can't even drive, and are forced to appoint a male guardian to make all their major decisions — such as getting married, accessing healthcare, traveling abroad, working and even leaving prison.

The country also uses technology to monitor the movement of women, with appointed guardians alerted should their female charges attempt to leave the country.

The Gulf Center for Human Rights reported in April that prominent Saudi activist and feminist Maryam Al-Otaibi was arrested after fleeing her father's home to live independently.

Saudi women have a tracking system installed on them so that their male guardian, even as young as 16 year old, can monitor their movement!

​"The country has the most appalling record on women's rights in the entire world. Its election to the committee is an absolute joke, and hugely embarrassing for the United Nations and the countries that voted for it," Dr. Wellings told Sputnik.

The vote was conducted via a secret ballot, and several states have refused to confirm or deny whether they played a role.

​WikiLeaks has charged that alleged liberal bastion Sweden may be among them, and has offered a reward for further information. Nonetheless, UN Watch believes at least 15 of the 54 democratic members (including five European Union Member States) of the UN Economic and Social Council voted in favor.

Sweden is hiding docs about its vote: re placing Saudi on the UN Women's Rights Commission. We issue a €10k reward. https://t.co/cLRcuIiQXz

​Dr. Wellings notes there are rumors the UK was a key supporter of Saudi membership, given the two countries' close relationship — and the reluctance of countries to publicly acknowledge their actions isn't surprising.

"Western governments are going to be very reluctant to admit to this because it's so hugely embarrassing, and it exposes their unsavory relationships with Saudi Arabia. These relationships are based on the huge amounts of money that large corporations make from the Kingdom, not merely in arms sales, but oil and gas businesses, and also the vast amount of money the country invests in the City and Wall Street. They won't welcome light being shed on any of this," he adds.

It has been argued Saudi Arabia's inclusion may have been pursued by some members to prompt the Kingdom to enact liberalizing reforms, however Dr. Wellings believes the argument to be "weak."

"Over recent years there's been a lot of talk of change by Saudi Arabia, but no action and no concrete policies at all. Moreover, human rights abuses have continued in the Kingdom, and in countries such as Yemen where Saudi is intervening.

"This move is purely to do with economics, and shutting down criticism within these organizations. It affects the reputation of the UN — commissions have influence over foreign aid policies, and this could impact concrete action on the ground," he concludes.

000000
Popular comments
The Norwegian minister Brende refuses to tell what the "Norwegian vote" was. Don't the idiot understand that he could just say it was a positive vote, even a child could figure that out.