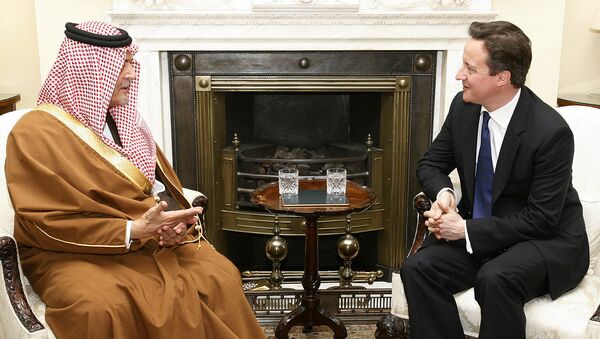 Many have wondered how Saudi Arabia, a nation with a deplorable human rights record, was elected to the UN human rights council in 2013. According to newly translated WikiLeaks cables, a "secret deal" with the British government played a key role.

Last week’s announcement that a Saudi Arabian diplomat would serve as chairperson on of the United Nations human rights advisory panel left many stunned. Given Riyadh’s continued bombing of Yemen, and its plan to crucify a 17-year-old political dissident, the Saudi government hardly seems like a banner for civil justice.

"In essence, there has to be a human rights council. But the human rights protection will depend upon those who are interested in promoting human rights," Director of the Human Rights Action Center Jack Healey told Sputnik.

"And the government of Saudi Arabia has a long history of not allowing human rights activists to monitor in their own country."

The appointment has raised new questions about how Riyadh even became a member of the human rights council in the first place. Diplomatic cables obtained by Wikileaks in June, and recently translated by both UN Watch and newspaper the Australian, show that the United Kingdom struck a deal with the Saudi government to ensure both countries were elected to the council in 2013.

Another cable indicates that the British government may have accepted a bribe of $100,000 for "expenditures resulting from the campaign to nominate the Kingdom for membership of the human rights council for the period 2014-2016."

Speaking to the Guardian, a Foreign and Commonwealth Office spokeswoman stressed that "we never reveal our voting intentions or the way we vote."

"The British government strongly promotes human rights around the world and we raise our human rights concerns with the Saudi Arabian authorities," she added.

"Based on the evidence, we remain deeply concerned that the UK may have contracted to elect the world’s most misogynistic regime as a world judge of human rights," he told the Australian.

"UN Watch finds it troubling that the UK refuses to deny the London-Riyadh vote-trade as contemplated in the Saudi cable, nor even to reassure the public that their voting complies with the core reform of the UNHRC’s founding resolution, which provides that candidates be chosen based on their human rights record, and that members be those who uphold the highest standards of human rights."

The revelations raise new concerns about the tendency of Western nations to look the other way for its Saudi ally.

"If the UK is doing back-room deals with Saudi officials over human rights, this would be a slap in the face for those beleaguered Saudi activists who already struggle with endemic persecution in the kingdom," Allan Hogarth, with Amnesty International UK, told the Guardian.

"The UK should be supporting the rights of [those persecuted], not pushing the non-existing human rights credentials of the Saudi Arabian authorities."