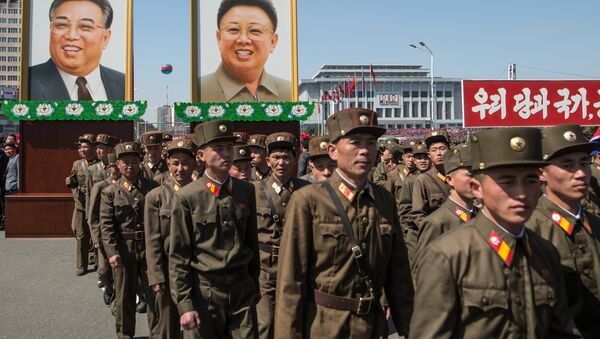 © Sputnik / Iliya Pitalev
/
Go to the mediabank
Subscribe
International
India
Africa
After beating the drums of war for weeks, US officials have slightly changed their tune, dismissing North Korea's latest round of threats as "not to be trusted," even as the rogue state appears to be preparing for another nuclear test.

North Korea was widely expected to launch some kind of armaments test last week, in violation of international law and sanctions. As speculation grew, the US suggested a suspected nuclear test could trigger a preemptive conventional weapons strike. North Korea threatened retaliation, the US sent a show of force toward the peninsula, and the world watched with increasing anxiety.

Now, however, after a missile test last week that barely even got off the ground, the US is using a more measured tone. Defense Secretary James Mattis dismissed North Korea's threats of a "super-mighty preemptive strike" that would reduce both South Korea and the US mainland to ashes on Friday by saying the country was full of hot air and its aggressive language was "not to be trusted."

"As far as North Korea's latest words (are concerned), I think we've all come to hear their words repeatedly, their word has not proven honest," Mattis told a news conference in Israel, Reuters reports.

The threats are simply "provocative," he said.

Asia
What It's Like to Be Stranded in Pyongyang Airport (PHOTOS)

They were provocative enough for US President Donald Trump to say he'd sent an "armada" to the Korean Peninsula and for top defense officials to say the USS Carl Vinson aircraft carrier was headed to the region. The Vinson turned out to be headed in the other direction, causing a few days of confusion among officialdom, but is now due in South Korean waters in the next few days, US Vice President Mike Pence said April 22.

Though last Saturday's North Korean holiday passed without a sixth nuclear test, there is another anniversary this Tuesday: the 85th anniversary of the founding of the Korean People's Army with a show of its military power. This is another significant date in the North Korean calendar, and another date experts suspect could bring another nuclear test.

Watchdog website 38 North reports that commercial satellite imagery from April 19 indicates possible preparations for a nuclear test at North Korea's Punggye-ri Nuclear Test Site. It has spotted "probable trailers near the North Portal, the tunnel that North Korea appears to have been preparing for a nuclear test."

They note "at least five mining carts along the tracks leading to the spoil pile and one probable small equipment trailer adjacent to the support building. A net canopy remains in place, presumably concealing equipment, and the pumping of water out of the tunnel to maintain an environment optimal for instrumentation and stemming seems to have ceased."

The website acknowledges that it's unclear whether the activity represents a pause before a coming test, a prolonged stand down or normal operations. But, "[r]egardless, satellite imagery continues to indicate that the Punggye-ri nuclear test site appears able to conduct a sixth nuclear test at any time once the order is received from Pyongyang."