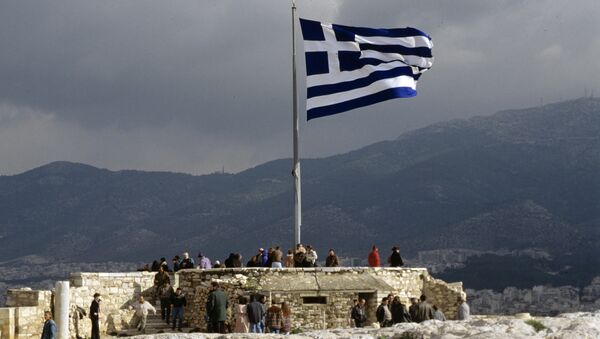 © Sputnik / Vladimir Rodionov
/
Go to the photo bank
Subscribe
Greek Foreign Minister Nikos Kotzias said that the upcoming Forum of Ancient Civilizations conference, hosted by Greece, will bring together countries with some of the world's oldest cultures to find ways of exercising soft power across the world.

Soft Power: China Stepping Up Its Global Economic Expansion
MOSCOW (Sputnik) — The upcoming Forum of Ancient Civilizations conference, hosted by Greece, will bring together countries with some of the world's oldest cultures to find ways of exercising soft power across the world, Greek Foreign Minister Nikos Kotzias said Friday.

The two-day conference is due to take place in the Greek capital of Athens on Sunday and will feature representatives from China, India, Iraq, Iran, Egypt, Italy, Mexico, Peru, Bolivia as well as Greece. These states descended from civilizations such as Ancient Egypt, Ancient Greece, the Roman Empire, the Chinese empire, Persia and the Incas. Sunday's conference will become the forum's inaugural event.

"On Sunday, the meeting of states with a long history of civilization starts. It is relevant today and impacts humanity via 'soft power' and economic influence. Initiated by Greece and supported by China, we have organized the meeting of 10 countries with a significant historic cultural baggage… We will discuss how we can use the possibilities offered by cultural cooperation for the good of the world and of our peoples," Kotzias said at a press conference held in the run up to the event.

Organizers have received at least four requests from other states to join, he added, noting that it was still up for debate whether the forum will be open for membership and whether events will be held on a regular basis.

The participating states' foreign ministers are due to meet on Monday, while Sunday will be dedicated to scientific meetings, according to the minister.

"We have the chance to make it [the forum] an important institution and show that international and global institutions need soft power, which is increasingly dominant, rather than hard force or economic pressure," Kotzias explained, noting that he has bilateral meetings planned with Chinese, Iranian and Egyptian foreign ministers.

The GC10 group initiative was unveiled in late 2015 by the Greek Foreign Ministry. The "group of ten" of the world's greatest civilizations is home to almost half of the world's population.

000000
Popular comments
"Ancient Civilizations"... right... Those named in the article are some of those accepted by mainstream science indeed. But then again, and before those?... Just the first 20 minutes of a recent film-documentary, free (so far the full documentary seems to only be available on Video On Demand, hence not free) : www.youtube.com/watch?v=EJBXFnIUcrM And with so much evidence being found, some discovered, other re-discovered, lately, worldwide, I'm pretty sure this is just the tip of the iceberg... Antarctica may soon reveal to be the smoking gun for a new History of Mankind...