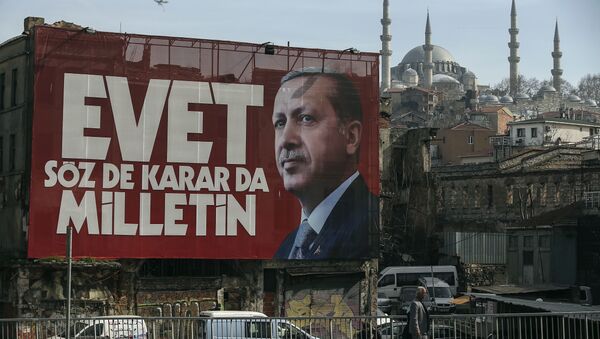 President of the European Commission Jean-Claude Juncker and EU Foreign Policy Chief Federica Mogherini have called on the Turkish authorities to seek the "broadest possible national consensus" in the implementation of the constitutional amendments, which were supported by over 50 percent of votes in the referendum.

MOSCOW (Sputnik) — Turkish authorities should try to reach a national consensus when implementing the constitutional changes as the amendments appear to have been passed at nationwide referendum at a narrow margin, Juncker and Mogherini said Sunday in a joint statement.

"We encourage Turkey to address the Council of Europe's concerns and recommendations, including with regards to the State of Emergency. In view of the close referendum result and the far-reaching implications of the constitutional amendments, we also call on the Turkish authorities to seek the broadest possible national consensus in their implementation," the statement read.

The joint statement went on to say that the constitutional changes and their "practical implementation" would have to be examined from the point of view of Turkey's role of a candidate for EU membership and a member of the Council of Europe.

Juncker and Mogherini also said they were "awaiting the assessment of the OSCE/ODIHR International Observation Mission, also with regard to alleged irregularities."

Erdogan on Referendum Result: 'Historic Decision on Turkey's Governance System'
Erdal Aksunger, the deputy chairman of Turkish opposition CHP Party, stated earlier in the day that the party had objections concerning at least 37 percent of polling stations and suggested that the counting of the results might have been manipulated.

According to the preliminary results of the referendum provided by the Anadolu news agency, supporters of the constitutional amendments increasing the powers of the country's president have 51.3 percent of votes after 99% of votes have been processed.

Earlier in the day, Turkish citizens cast their ballots in a referendum on amendments to the constitution, which, if passed, would expand presidential powers over the legislature and the judiciary and allow the president to remain the head of the political party he represents, which is not permitted by the current legislation.