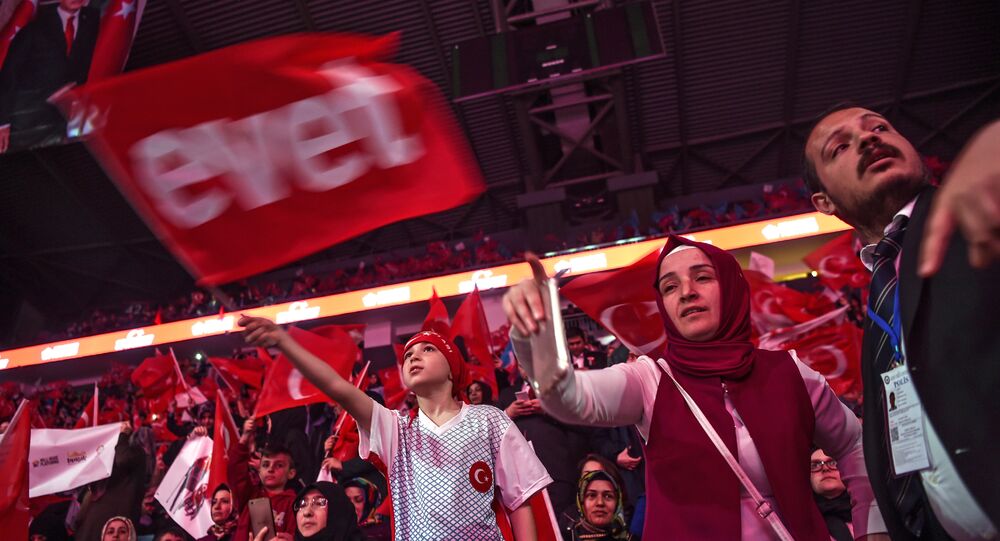 "According to the preliminary results, there are 1.25 million more of 'yes' votes than 'no' votes. It means that 'yes' won. Final results, considering the time allocated for the appeals, will be known in 11-12 days," Guven told journalists.

© REUTERS / Alkis Konstantinidis
More Power? Erdogan 'Went Above and Beyond Anything Imaginable' After 2016 Coup
Guven also said that the decision to accept ballots without stamps, if proven that they were not brought from the outside, was necessary because some polling stations ran out of stamped ballots. Guven noted that similar decisions had been made before.

Yildirim said that "No" votes have the same value as those votes in support of the changes. He said that the last word belongs to the people and the Turks said "yes."

© REUTERS / Murad Sezer
How Biggest Day for Turkey in Decades May Influence Ties With Russia
On January 21, the Turkish parliament approved constitutional amendments that would strengthen the presidential powers over the legislature and the judiciary. If approved in the referendum, the president will also be able to remain the head of the political party he represents, have the ability to appoint a number of top judges and declare a state of emergency, which is not allowed by the current legislation. The decision was criticized by opposition parties as a power grab attempt by the president.

About 55.3 million of voters were expected to cast their votes at over 160,100 polling stations, with 460 additional ballot stations operating in prisons. Turkish citizens living abroad have voted on the constitutional amendments before the voting day.

Gap Between Voters For, Against Constitutional Changes in Turkey Narrows to 3%

Tomorrow Turkey Will Never Be the Same Again