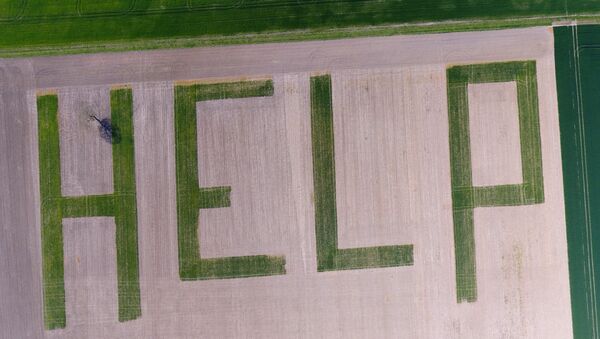 A French farmer from the Indre-et-Loire region in west-central France has mown the word “Help” in four giant letters on his wheat farm.

France's Francois Fillon: Expecting Russia to Crack Under Sanctions 'Naive'
The size of the sign is 100x48 meters and it is clearly visible from the aircraft while landing at the capital airport of Orly.

Jacques Fortin, whose farm is in Athee-sur-Cher near the central town of Tours, created his message in capital letters on his five-hectare (12-acre) wheat field, with bright green letters.

“This is a collective SOS signal on behalf of all the farmers. We had four consecutive years of bad weather. Farmers are burnt out, they are tired,” 63-year-old farmer Jacques Fortin said.

He further said, “Political leaders do not listen to us. They're deaf to our anger. I hope they're not blind and will read this message of despair,” Fortin said.

Earlier, Samuel Vandal, General Secretary of the Young Farmers’ Union (Syndicat des Jeunes Agriculteurs), told Radio Sputnik that French farmers are in dire need of help as they are facing a crisis which has crippled French dairy production and the pork and cattle sectors.

"I live in a world where I have the responsibilities of a chief executive and I live below the poverty threshold," Fortin said. "It's not normal to live on 350 euros a month when you work every day… Some break down. Others commit suicide," Fortin said.

French farmers are dissatisfied with the low purchasing prices for their goods and with insufficient measures proposed by the government to overcome the country's agricultural crisis. Protests against falling food prices have been taking place in France since July 2015.

The farmers have also been affected by canceled Russian food exports after Moscow imposed an import ban on certain food products as a response to countries that earlier implemented anti-Russian sanctions.

The crisis has left one in three French farmers on the verge of bankruptcy.