Ahmadinejad's Back: Ex-President Registers to Run in Iranian Election 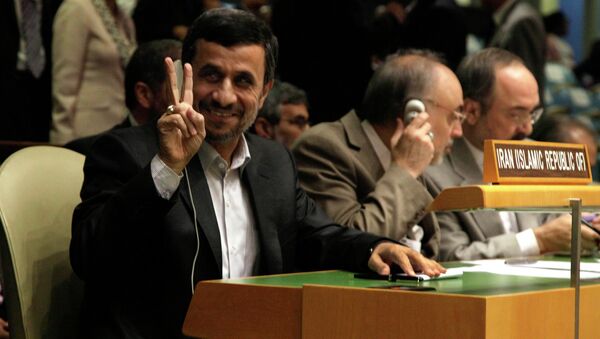 Former conservative President of Iran Mahmoud Ahmadinejad has registered as a candidate in the country’s upcoming presidential election.

"The conversation that he had… with Ayatollah Khamenei was really to be taken as a personal advice and a personal opinion of the leadership rather than an order," she said during Becker's Loud & Clear broadcast.

"This is a great degree of misunderstanding here as to how Iranian politics works and how its system of governance is actually set up… Any presidential hopeful has to be vetted by Iran's Guardian Council, but the way it's being set up and architected is actually fair. It's set up in such a way that all the council members actually represent a particular voice within the country."

The election on May 19 is seen by many as a referendum on the nuclear agreement and its ability to improve the country's sanctions-burdened economy.

"I don't think it's a referendum on foreign policy because that would be really reducing the whole process of Iran's presidential election," Shakdam said, adding that it is critically wrong to think of Iran's political system as binary.

"It's not really about the reformists versus the principlists. It doesn't work this way, in the sense that you have many people within Iran who are shifting… It would be very dangerous to pin former President Ahmadinejad as being just a principlist… because there's a lot of the things that he has done within Iran in terms of internal policies that could qualify as being reformist."

Like It or Not: Syrian Crisis Can't Be Resolved Without Russia, Iran - German FM
According to Shakdam, Ahmadinejad's decision to run was not an act of defiance but simply a choice based on his willingness to offer a "different kind of a flavor in politics" and ensure that the voices of his faction are heard, especially in the context of the current tension between the US, Iran and Russia, and around the Middle East in general.

"It's not a rejection of anything, it's not a disagreement of any kind, it's just a decision that is being made internally in Iran that the tone might need to change, and then people will decide what direction they want better."