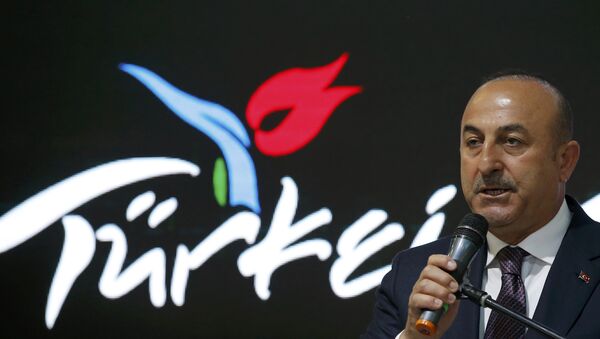 © REUTERS / Fabrizio Bensch
Subscribe
Turkey welcomes the airstrike of the United States on the Syrian military base in Ash Sha’irat in the Homs province and will support any future operations aimed at ensuring Syrian President Bashar Assad’s government's accountability, the Turkish Foreign Ministry said in a statement on Friday.

Turkey Calls For Establishing No-Fly Zone in Syria Following US Missile Strikes
MOSCOW (Sputnik) — On Thursday night, the United States launched multiple Tomahawk cruise missiles at the military airfield in Ash Sha’irat. US President Donald Trump said that the attack was a response to the alleged chemical weapon use in Syria's Idlib on Tuesday, which Washington blames on the Syrian government.

"We welcome the US operation early this morning targeting the Syrian regime’s Shayrat air base in the aftermath of the regime’s Khan Sheikhoun chemical weapons attack which constituted the latest example of the regime’s crimes against humanity and war crimes, committed in the last six years," the statement said.

According to the statement, Turkey would fully support steps to ensure accountability of Assad’s administration and to prevent impunity in case of conducting crimes.

"Turkey will continue its cooperation with the international community to prevent the regime’s continued practices of terror and mass punishment directed at its own people and to pave the way for the advancement of a political solution in Syria," the statement said.

Ankara Views US Missile Strike on Syria Airfield as Positive Step - Deputy PM
Earlier in the day, Turkish Deputy Prime Minister Numan Kurtulmus said Turkey considered the US missile strike on a military airfield in Syria as a positive step and that the Assad administration should be punished.