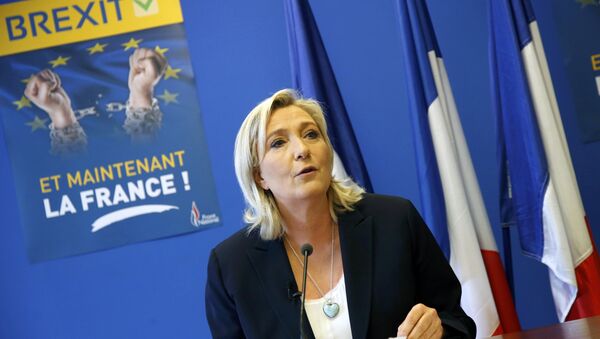 Ankara Views US Missile Strike on Syria Airfield as Positive Step - Deputy PM
MOSCOW (Sputnik) — French presidential hopeful Marine Le Pen, leader of the National Front party, condemned on Friday a US strike on an airfield in Syria, adding that she was surprised by such a decision of the US authorities.

"What happened in Syria is awful, and I strongly condemn it," Le Pen wrote on Twitter.

The far-right politician added that an international investigation of the chemical attack allegedly conducted by the Syrian government was needed prior to the attack itself.

"It is necessary to let democracy and the Syrian people to speak out. It is they who must choose their leader," Le Pen added.

Putin Considers US Attack in Syria Aggression Against Sovereign State - Kremlin
On Thursday night, the United States launched 59 Tomahawk cruise missiles at the Syrian military airfield in Ash Sha’irat, located about 40 kilometers (25 miles) from the city of Homs. US President Donald Trump said the attack was a response to the alleged chemical weapon use in Syria's Idlib on Tuesday, which Washington blames on the Syrian government.