US-Backed Right Wing 'Paralyzed the Rule of Law in Venezuela' 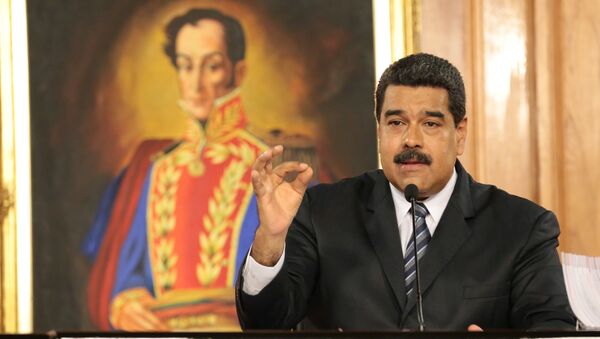 © REUTERS / Miraflores Palace
Subscribe
The war on Venezuela’s Bolivarian revolution continues, amid claims of a “self-coup” and allegations that the National Assembly was dissolved.

Author and activist Dr. James Cockroft, the founder of the Network of Intellectuals, Artists, and Social Movements in Defense of Humanity, told Radio Sputnik's Brian Becker that the threat of a coup in Venezuela comes in fact from the right wing, not the country's socialists.

"A coup sponsored by the United States in 2002, a military coup against Chavez, has continued to accelerate different types of pressures to bring about either a soft or hard coup in Venezuela, and that's the context of what's happening now," he said during Becker's Loud & Clear broadcast.

The country's supreme court ruled in January that the opposition-controlled National Assembly was in contempt of the constitution, citing its failure to remove three lawmakers securing the domination of the right-wing, who were temporarily suspended over fraud charges.

​A recording shows the then-secretary of the government of Amazonas illegally offering taxpayer money to citizens, encouraging them to vote for opposition candidates. When the court ordered the National Assembly to hold elections to replace corrupt leadership, the legislative body refused.

"It was discovered, with evidence and proof, that those three delegates had bribed the voters and engaged in threats against those who didn't vote for them," Cockroft said.

On Thursday, the supreme court, comprised of loyalists to President Nicolás Maduro, seized legislative powers from the National Assembly, citing that the body continues to be in contempt of the constitution.

OAS Calls on Venezuela to Release Political Prisoners
"As long as the disrespect and invalidity of the proceedings of the National Assembly persists, this Constitutional Chamber will ensure that the parliamentary powers are exercised directly by this Chamber or by the body it has in place to ensure the rule of law," the ruling read.

Critics say the move effectively gives the government license to write its own laws, taking the country a step closer to a dictatorship. The move was sharply criticized by the opposition, the US and the Organization of American States (OAS).

"The sentences from the supreme court… are the final blows with which the regime subverts the constitutional order of the country and finishes with democracy," OAS Secretary-General Luis Almagro said in a statement.

Cockroft pointed out that it was the US and the OAS, "sometimes called the Ministry of the Empire," that ruled against dialogue.

Venezuela Suspends CNN En Espanol Due to Threat to 'Peace, Democratic Stability'
"In fact, the president of the OAS declared some time ago that he wrote to the opposition in Venezuela to not engage in dialogue, whatever you do. Now there's a reason why they don't want a dialogue," he said.

According to Cockroft, it is only natural that the US is not fond of this independent foreign policy in the region being stimulated by the Venezuelan revolution.

"That's why you have to go all the way back to 2002 and the coup against Chavez, and take it right up to the present to see the constant attempt by the United States to overthrow the democratically elected government of Venezuela," he claimed.

000000
Popular comments
Hey President Maduro! Close the US Embassy in your country! Then you will see the so called opposition will go bankrupt! They are CIA sponsert!