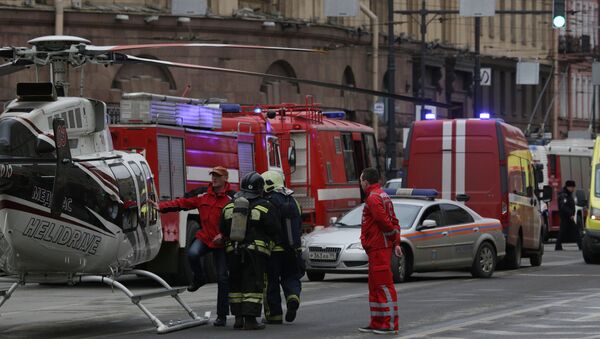 Four French presidential candidates united in extending condolences to Russian people after a deadly explosion in the Saint Petersburg subway.

MOSCOW (Sputnik) — French presidential candidates on Monday offered their condolences to Russian people in the wake of the explosion in Russia's second largest city.

"Yesterday in London, Today in St. Petersburg. Solidarity with the Russian people," center-right Francois Fillon wrote on his Twitter.

Fillon added that the fight against terrorism should be a priority.

Independent candidate Emmanuel Macron also proclaimed solidarity with the Russians on his Twitter, adding 'I am with you" in Russian.

"I am offering all my condolences to the Russian people after the explosion in St. Petersburg," far-right Marine Le Pen said, as quoted on her Facebook.

Benoit Hamon‏, the nominee of the ruling Socialist Party, also offered his condolences to the people close to the victims of the blast and expressed his solidarity with the Russian people.

The explosion occurred in a subway train car, on the stretch between the two central stations at about 3 p.m. local time (12:00 GMT).

According to Russian Health Minister Veronika Skvortsova, at least 10 people were killed and 37 others injured in the blast in St. Petersburg metro earlier on Monday.

Homemade Explosive Device Defused in St Petersburg Metro After Deadly Blast
Russia's Investigative Committee opened a criminal investigation into a suspected terrorist attack, following the blast, but the committee's spokeswoman stressed that the investigators would look into all potential lines of inquiry.

The London attack that Fillon was referring to took place on March 22. Khalid Masood, 52, hit several people while driving on Westminster Bridge in the center of London before attempting to enter the Houses of Parliament, armed with a knife. After stabbing a police officer, who was later confirmed dead at the scene, the attacker was shot.

Approximately 50 people are said to have been injured with four others killed. The Daesh terrorist group, outlawed in Russia, claimed responsibility for the attack.