Still in the Air: Can Iraqi Kurds Gain Independence Without US Support 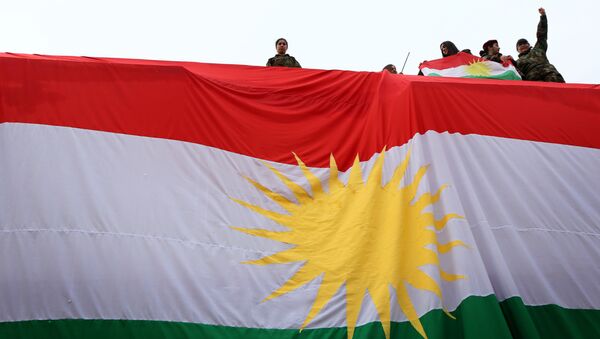 His interview came after representatives of two major Kurdish parties in Iraq agreed to hold a referendum on independence later this year, in a deal that was clinched during talks between the Patriotic Union of Kurdistan (PUK) and the Kurdistan Democratic Party (KDP) in Iraq on Sunday.

According to Rudaw news outlet, the sides decided to establish a special joint committee that will be tasked to prepare the referendum.

In a joint statement, the parties noted that the Kurdish nation had a "natural right to decide on its political and administrative path in a referendum and an entity of an independent state."

The Kurds are the largest ethnic minority in Turkey, Iraq, and Syria, seeking the creation of an independent Kurdistan. These plans, however, find no favor either in Ankara or Baghdad, with Iraqi Prime Minister Haider Abadi stressing only last week that Baghdad will not allow Iraq to disintegrate and that the Kurds' potential separation would only harm them.

Speaking to Sputnik, Wladimir van Wilgenburg praised the fact that despite a spate of bilateral disagreements in the past, the PUK and the KDP finally manage to arrive at a consensus.

"It seems that both Kurdish parties are together moving closer to this independence referendum," he said.

War-Weary Iraqi Kurds Seek Independence 'As a Result of the Peace Process'
When asked about the chances of Baghdad authorizing the referendum, he said that "it depends not only on the reaction of the Iraqi Prime Minister, but also other parties."

He also warned of the far-reaching political consequences, "financial repercussions and sanctions" if the referendum is denied.

Additionally, Wilgenburg referred to the "huge financial implications" from a possible decision by Turkey to close its border in a bid to prevent Iraqi Kurds from gaining independence.

Touching upon Washington's possible role in the matter, he quoted a Kurdish civilian as saying that "it is very difficult to have independence without recognition from the US or the West."

"The Kurds have been the largest stateless nation in the world," Wilgenburg said, citing more than 40 million Kurds who have yet to establish their own state.

"They want to be sovereign and independent," he added, saying that the decision will also hinge on a position of Baghdad, Ankara, Tehran and Damascus.

Dialogue Between Iraqi Gov't, Kurds Necessary Even in Case of Secession
Late last month, KDP representative Said Mamuziny told Sputnik Turkey that Iraqi Kurdistan is in the process of putting everything in place to hold an independence referendum in the near future and that 95 percent of the Kurds in the region support a divorce from Baghdad.

"The Kurds have a right to achieve independence and they cannot wait for this day to come. We are currently in the process of preparing [for the referendum], which President Barzani said will take place in the near future," Said Mamuziny said.