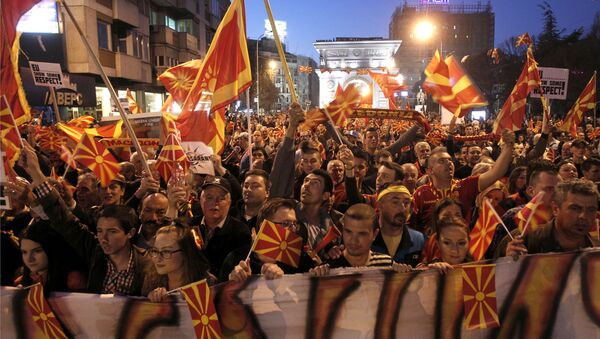 NATO Willing to See 'Blood in Streets of Macedonia' for Greater Albania Project
Public opinion in the former Yugoslav Republic is turning against Brussels because of its support for a proposed government coalition with Albanian parties backed by Tirana. Many fear the "Tirana platform" will lead to the eventual federalization and possible break-up of the country.

Earlier this week, the EU's Commissioner for European Neighbourhood Policy and Enlargement Negotiations Johannes Hahn traveled to Skopje where he held talks with political representatives in a bid to contribute to a solution to the political deadlock there.

However, his visit was greeted with protests by an estimated 200,000 Macedonians in Skopje and other cities, in which demonstrators called on Hahn to "respect the will of Macedonia" and condemned the Tirana Platform, an initiative sponsored by the Albanian government to increase Albanian influence in Macedonian politics.

"We are here to tell you that this nation will not accept the Tirana platform. That is the same as asking the US to accept the nuclear program of North Korea," protest organizer Darko Mijalkovski told the crowd.

​'Yesterday's protests in one minute.'

​​In late December, Albanian Prime Minister Edi Rama invited the leaders of four Albanian parties in Macedonia to Tirana for a meeting at which they formulated a so-called "Tirana Platform," under the auspices of the Albanian government.

The protest against the Tirana platform and the EU was organized by the group, "For a United Macedonia," whose request for a meeting with Hahn was refused. Protest organizer Bogdan Ilijevski addressed the EU commissioner.

"Hahn, instead of meeting with us, wrote on his Twitter account that the road to the EU remains open for Skopje. He did not mention the name of our country, but wrote Skopje instead. Well, Commissioner Hahn, Macedonia is not just Skopje. Macedonia is Bitola, Ohrid, Prilep, Kumanovo, as well, and all the other 43 cities and towns where tonight 200,000 people took to the streets," Ilijevski said, Independent.mk reported.

In turn, Macedonian President Gjorge Ivanov refused to meet with Hahn, who had criticized the President's decision to refuse Social Democratic Union of Macedonia (SDSM) leader Zoran Zaev a mandate to form a new coalition government. Zaev had gained Albanian support in return for concessions including the institution of Albanian as a second official language.

The possible implementation of the Tirana platform has led to fears that Macedonia will become divided among ethnic lines and also prompted protests earlier this month in cities across Macedonia in support of the country's territorial integrity.

'Mass protests by "For a United Macedonia" in 26 cities across Macedonia,' MKD news reported.

​Macedonian political analyst Cvetin Cilimanov told Sputnik that the visit illustrates the EU's divisions on the issue and the failure of Brussels to constructively engage with Macedonia's political problems.

"After the support that Ivanov received from Hungarian Prime Minister Victor Orban, it became clear that the EU doesn't have a united position on how to get Macedonia out of this crisis," Cilimanov said.

"Neither Mogherini nor Hahn was able to do anything during their visit to Skopje, so I can agree that the EU's politics have been defeated here."

"When Hahn was in Skopje, leader of the DUI party Ali Ahmeti said that the two largest Macedonian parties (VMRO-DPMNE and SDSM) need to negotiate and that a government formed without the support of VMRO-DPMNE would not last long," Cilimanov said.

On Friday, Gruevski's VMRO-DPMNE party called for new elections to solve the deadlock.

"The Tirana platform is unconstitutional and accepting it will plunge Macedonia into a process of federalization. This Tirana platform aims to destroy Macedonia and turn it from a multiethnic into a binational state … if he (Zaev) sees fit to accept and realize this platform, which affects the unitary character of the state, let him present it as his own election program," the party stated, Meta.mk reported.

The last parliamentary elections in December were a tight-run affair. The center-right VMRO-DPMNE won 51 seats, the largest proportion of any party in Macedonia's 120-seat parliament.

SDSM came in second with 49 seats, followed by the country's largest Albanian political party, the Democratic Union for Integration (DUI), which got 10 seats.