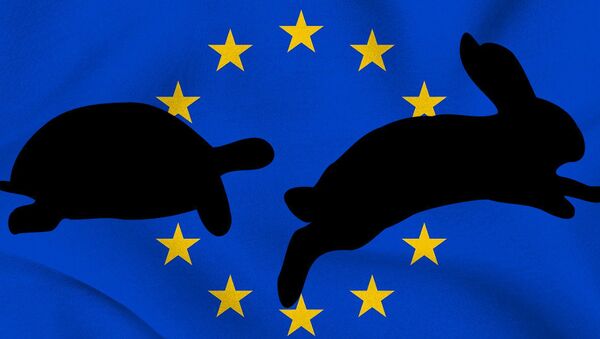 Slovak Prime Minister Robert Fico’s warning that Saturday’s EU summit in Rome could end in a disaster if the concept of a “two-speed” Europe, being lobbied by German Chancellor Angela Merkel and most other EU leaders, finds its way into the final declaration.

In an interview with Sputnik Czech, Leo Luzar, the chairman of the Czech parliament’s subcommittee on foreign economic relations, said that Visegrad Group members — the Czech Republic, Slovakia, Poland and Hungary — are categorically against the idea of a “two-speed” Europe.

World
'It's Up to Them': Amid 'Two-Speed Europe' Talk, China Pledges Support for EU
“It makes no sense, really. If we see Europe as a single whole, there should be no “first class” and “second class” citizens, which I believe would be the end of the EU,” Luzar emphasized.

He added that even though some EU countries are now in the Schengen zone, while others are not, and that the same goes with the Eurozone, Brussels should not institutionalize these temporary differences.

“They want to impose this inequality within the European family of nations. I repeat: this would be the end of it,” Luzar argued.

He also said that the so-called “Europe-1” countries could form a sort of a federation with a single defense and security policy, while all the rest would find themselves sidelined and eventually told to give up their remaining sovereign rights and join in.

“I’m certain that all the talk about a “two-speed” Europe is a smokescreen for their attempts to turn the European Union into a federation,” he warned.

He added that the Czech Republic “will say a flat no” to any mention of a “multi-speed” Europe in the final declaration of the Rome summit.

“The United States of Big European Powers – that’s what they want to have. We in the Czech Republic and many other countries like us are happy with the economic integration we now have  and want to have a say on matters pertaining to our national interest. What is at stake now is whether Europe is going to become a federation or not,” Luzar said in conclusion.

Change of Pace: 'Multi-Speed Europe' is Only Way to Prevent Breakup of 'Core EU'
Ahead of the 60th anniversary of The Treaty of Rome, which officially established the European Economic Community (TEEC), calls within the EU for a so-called "two-speed Europe" are becoming more vocal.

The idea behind the multi-speed EU is that different parts of the European Union should integrate at different levels and paces, depending on the political situation in each individual country.