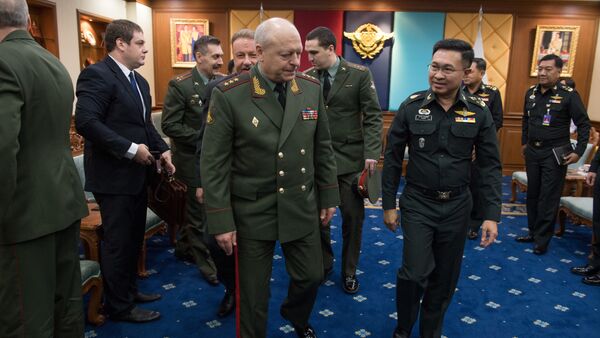 © AFP 2021 / ROBERTO SCHMIDT
Subscribe
Last week, Col. Gen. Oleg Salyukov, commander-in-chief of the Russian Army, paid a 3-day visit to Thailand. Reporting on the visit, the first of its kind in a decade, has been extremely sparse. That has left experts wondering whether Bangkok is considering the purchase of Russian T-90 tanks to replace its canceled order of Ukrainian T-84s.

During Salyukov's trip, which started Wednesday and wrapped up on Friday, the senior officer met with high-ranking Thai Defense officials, and visited Royal Thai Army facilities, including a mechanized section and a counterterrorism training center.

Reporting on the trip has been scant, with Russian media limiting their coverage to official announcements at the start and the end of the visit. Among the few details that emerged was news that the Russian officer had been gifted a badge and beret by Thailand's special forces. Salyukov was also said to have an entry into the book of condolences over the death of King of Thailand Bhumibol Adulyadej, who passed away last fall.

The Russian Embassy in Bangkok has been similarly tightlipped, telling reporters only that "the two sides discussed the current state and prospects for military and military-technical cooperation."

Thai Deputy Prime Minister Says Country in Talks on Submarine Purchase
Russian-Thai security and defense cooperation has been on the rise in recent years. Last spring, the two countries signed a military cooperation agreement. Russia has also committed to supply two Sukhoi Superjet 100 regional jet airliners for use by the Thai Air Force. Thai Defense Minister Prawit Wongsuwon made two visits to Russia over the last year. This summer, for the first time ever, a Thai unit will participate in the 2017 International Army Games. Talks have also been about sending Thai officers to study in Russian military institutions.

But what seems to have piqued the interest of observers about the visit was what wasn't said. In his analysis on the subject, military observer Sergei Ishchenko pointed out that it was curious for the Russian commander, undoubtedly busy with the war in Syria, NATO's buildup on Russia's borders, and other important issues, to make the long trip to Southeast Asia just for a goodwill visit.

Accordingly, Ishchenko noted, "it's natural to assume that in fact, something more important may have been discussed behind closed doors…But what exactly? The only reasonable theory, in my opinion, is money – and lots of money; for something less it would not have been worth sending such a high-ranking commander to the country."

The question that follows is: money for what? What kinds of weapons does Russia have which Bangkok may be interested in?

Here, the observer recalled the story from earlier this year about the Thai Defense Ministry's decision to terminate its contract with Ukraine on the purchase of several dozen T-84 Oplot main battle tanks.

Thailand Says 'No Thanks' to Ukrainian Tanks, Chooses China Instead
Bangkok canceled the $240 million contract with Kiev in January following never-ending setbacks with the tanks' delivery. The Thai Defense Ministry had planned to make the T-84 the backbone of its tank forces, replacing its stock of 1950s' vintage US M-41s. Unfortunately, although the contract was signed in 2011, and had been meant to be completed by 2014, by the end of last year, Ukraine had supplied Thailand with only 20 of the promised 49 tanks. 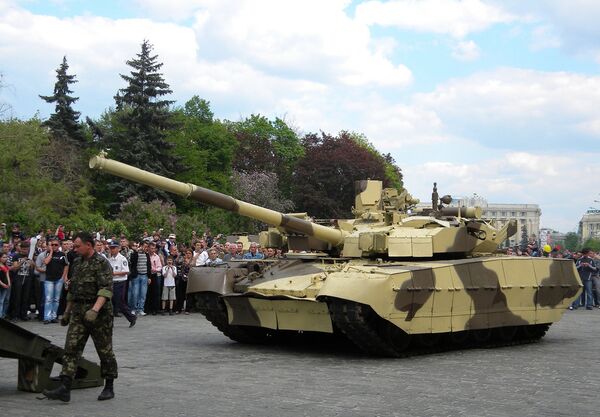 Covering the story, Thai media reported that the country now plans to buy the VT-4, a third generation Chinese MBT built by heavy machinery manufacturer Norinco. Bankok apparently already has a contract with Norinco for 28 VT-4s.

Russia's New Arms: T-90S, Third-Generation Main Battle Tank
But according to Ishchenko, Bangkok may still be considering Russian tanks as well, hence Col. Gen. Salyukov's visit. Specifically, the expert noted, Thailand would be looking at Russia's T-90, either in its T-90S or T-90MS variant. The price of 50 such tanks would amount to about $251 million.

Ishchenko suggested that it's the T-90s' active-combat 'testing' in Syria that turned it into an alluring prospect for Thai generals. "I'm confident that events in Syria were the turning point for the mood of the Thai military," he wrote.

"There, according to reports by foreign news agencies, several dozen 90s-vintage…T-90s are taking the most active role in combat in Bashar Assad's armies. And they're doing so practically without losses, even though the tanks are used to decisively resolve the outcome of key battles. With their participation, the most important settlements, including Aleppo, have been freed from the terrorists."

Russia to Supply T-90MS Tanks to a Middle East Country
Recent amateur video from the Syrian battlefield emerging on the internet, showing the tanks' resilience even to US-made TOW anti-tank missiles, are also probably having some influence on Thai generals' thinking, Ishchenko noted.

These videos are "powerful advertising" for the tank's defensive and combat capabilities, Ishchenko noted, and it's therefore little wonder that Uralvagonzavod, the T-90's maker, is flooded with orders from everyone who has the money to spend.

Just as importantly, the latest modifications of the T-90, including those introduced into the Russian army, also have an array of improvements, including better welding, casting, crew protection, munitions and other systems.

Ultimately, Ishchenko stressed that whatever the truth is behind Salyukov's Thailand visit, it's fair to assume that he probably didn't travel all the way to the country just to admire its beautiful orchid gardens.

000000
Popular comments
goldcamshaft, the longer Poroshenko is in a position of power the more difficult that will be, but let it be known in no uncertain terms, that The faucet of US dollars to keep the Ukraine afloat is just about to be turned off under the Trump Administration's Business Model - quality of product, efficiency of production, and on budget! Poroshenko is in over his head.
PaleRider
18 March 2017, 20:20 GMT1
000000
goldcamshaft, It is too late to embrace brother Russia after the many disgusting acts ( Odessa massacre , MH17 shootdown , to mention two )that Kiev is guilty of. First , Banderastan must be denazified very brutally.