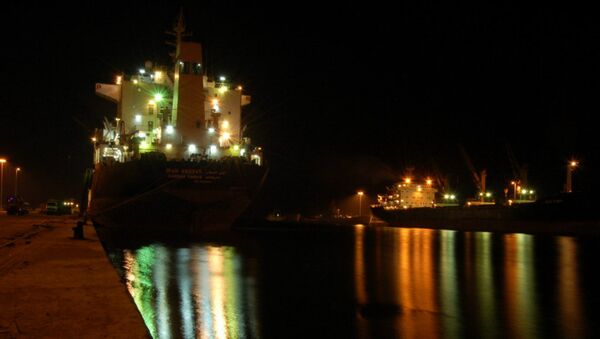 Following his meeting with Russian President Vladimir Putin in Moscow earlier this month, Netanyahu told reporters that conveying to Putin the threat posed by Iran was one of main goals of his visit.

"I clarified to President Putin our vehement opposition to the establishment of Iran and its tentacles in Syria," Netanyahu said. "We see Iran is trying to build up a military force, with military infrastructure, in order to establish a base in Syria, including attempts by Iran to set up a sea port," he added.

How Netanyahu Wants to 'Muzzle' Iran With the Help of Russia
Netanyahu noted that Iran's presence in Syria was contrary to Israel's interests, and suggested that it actually "doesn't match the long-term interests of anyone except Iran."

Iranian officials soon refuted the prime minister's claims, and similar claims made by US media over the weekend about Iran's supposed plans to establish a naval base in Syria's Latakia. Officials stressed that the Iranian presence in Syria was limited to military advisers, and added that these are in the country at the request of Syria's legitimate government. Iran has no plans to create any military bases in Syria, they said.

Asked to comment on Netanyahu's diplomatic offensive, and why he picked Russia to complain to about Tehran's alleged ambitions, Middle East expert Hassan Hanizadeh, the former editor-in-chief of the Mehr News Agency, explained that the move was little more than an attempt to drive a wedge into the Russian-Iranian strategic partnership.

Speaking to Sputnik Persian, Hanizadeh said that there was good reason for Netanyahu to be concerned about Russian-Iranian ties.

"The relationship between Moscow and Tehran can be assessed as strategic. The two countries have a unified position on a number of issues, particularly as far as the Middle East and Syria are concerned. Israel, in turn, is trying to drive a wedge into these relations, to destroy them," the observer said.

Iran Refutes Media Allegations on Plans to Set Military Base in Syria
Hanizadeh suggested that this was played out during Netanyahu's trip to Russia, where the prime minister tried to set the Russian president against Iran. "Netanyahu attempted to show, using these deceitful tricks, that Iran was looking to expand its territories, or its sphere of influence, by establishing a naval base in Syria, which in turn would be a direct threat to Israel."

Furthermore, the analyst pointed out that even though the naval base rumors were false, Iran, like any other country, has the right to establish whatever kinds of relations it wants to with friendly nations.

"Any country, on the basis of international law, has the right to establish and independently develop diplomatic relations with other states," Hanizadeh stressed. "Israel has dozens of [secret] air and sea bases in different parts of the world, yet no one is indignant over this fact. Even if Iran did want to build a base in Syria, at the request of or in agreement with the government of this country, this would be legal. Nevertheless, for some reason [even rumors of such bases] immediately cause alarm and anger from the Israeli leadership."

Downed IDF Aircraft: Syria's SAMs 'Send a Very Special Message' to the Israelis
In reality, Hanizadeh reiterated, Tehran does not have any plans to create permanent bases in Syria. "There is no such goal. But Iran reserves its right to cooperate with friendly countries." And that includes military cooperation, pending that it is approved by the partner country's internationally recognized government.

Ultimately, Hanizadeh stressed that Israel and Prime Minister Netanyahu "have no right to talk about or judge relations between other countries – or to make any claims toward a power like Russia. Russia is a sovereign state, and has the right to make decisions independently, to build relationships on the basis of its national interests with whomever and however it wants. Israel has no right to interfere in this process."

Therefore, the analyst suggested that as far as Moscow was concerned, "the statements by Benjamin Netanyahu [about the 'Iranian threat'] will be ignored, and a wise leader like Vladimir Putin simply won't pay them any heed."