Brexit Talks: 'Both Sides Want to Reach a Deal, but Politics May Get in the Way' 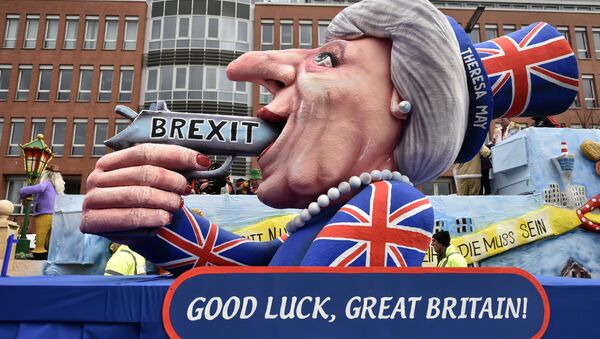 © AP Photo / Martin Meissner
Subscribe
International
India
Africa
The UK government is working on contingency plans in case Britain has to leave the European Union without a deal, Brexit Minister David Davis told the media on Sunday. Radio Sputnik discussed this with Jonathan Portes, Professor of Economics at King's College in London.

Professor Portes said that there is “a significant possibility” of Britain opting out without any agreement because there are a number of points during the long process of negotiation indicating that “things might go wrong.”

UK Parliament Gives Final Approval for Brexit
When asked if London’s demands for the return of large sums of British money in the European Investment Bank could be a stumbling block, Jonathan Portes said it certainly could.

“This is something that has to be resolved even before the EU starts talking about a deal and what happens after Brexit, so this is sort of a precondition.”

He added that he didn’t think that the amount of British money in question was that large in economic terms.

“We are talking about 15 or 16 billion euros. This is actually not a huge amount of money and it’s silly for Britain to pretend that it is. It is a big political issue in the UK and there will be some hard bargaining on this. Both sides want to reach a deal, but politics may get in the way.”

According to the EU chief negotiation on Brexit, the UK will have to reach a deal on Brexit by October 2018. Meanwhile, Brexit Secretary David Davis says he expects Britain to leave the EU by March 2019.

Jonathan Portes said that “before we even start negotiating the deal we have to talk about the terms of the divorce, that is money and other issues as well. That will take some time. And then politics gets in the way.”

“We have Dutch elections this week, French elections in a couple of months, and German elections. All these things get in the way. Moreover the deal before Brexit will need to be ratified by European parliaments,” he added.

Speaking about possible concessions the sides could be prepared to make, he said that a constructive British attitude towards the settlement of the exit deal and acceptance of the legitimacy of its obligations could generate quite a lot of goodwill.

Brexit Begins to Feel Too Real, But With Strings Attached
“On both sides, an early agreement on the status or citizens resident in other countries, such as EU citizens resident in the UK and EU citizens living in Britain, that we are going to allow them to stay and have access to public services, would generate a lot of goodwill on both sides of the Channel,” Professor Portes continued.

He added that if the sides get hung up on the divorce proceedings as such, that could really be chaos.

Jonathan Portes noted that the other type of no deal, which he believes is more likely, is failure to agree on the terms of the future trade relationship between the UK and the EU.

“Despite David Davis and Prime Minister May saying that no deal is better than a bad deal, the general consensus is that no deal is really a very, very bad deal indeed,” Jonathan Portes said in conclusion.

In January, British Prime Minister Theresa May laid down 12 points of her Brexit plan, saying that she wanted to get the United Kingdom out of the EU single market and to partially leave the customs union.

At the same time, she expressed hope the United Kingdom would manage to agree on zero tariffs with the European Union, and continue to cooperate in certain areas.

Brexit negotiations are expected to begin by the end of March after London invokes the Article 50 exit clause of the EU Treaty, following last June's referendum decision to leave the European Union.