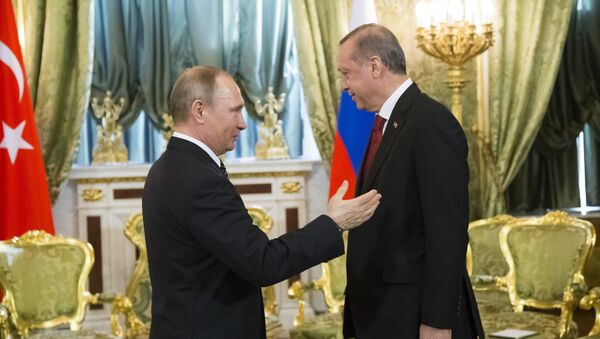 'Normalization Completed'? What Erdogan Wants From Moscow
Despite the short duration of the trip, the agenda of the negotiations was rather wide, Mirzayan, Associate Professor of Finance University with the Government of the Russian Federation writes in his article for RIA Novosti.

"Thanks to the very diligent preparatory work of the diplomats, economists and the military, there has been mutual understanding reached on almost all of the issues on the agenda. This completely satisfied President Erdogan, who came to Moscow to win as many victories as possible," the geopolitical analyst says.

Vladimir Avatkov, head of the Center for Eastern Studies, International Relations and Public Diplomacy meanwhile noted that the Turkish leader is in real need of small and grand public successes ahead of Turkey's upcoming constitutional referendum on switching to a presidential system of governance. This will help him to gain more support for the proposed constitutional reforms.

Judging by the announcements at the joint press conference, Mirzayan notes, the economic issues were the easiest to solve. Erdogan, he says, has come with the aim of lifting all the sanctions imposed by Moscow after the incident with Russia's SU-24 in November 2015. 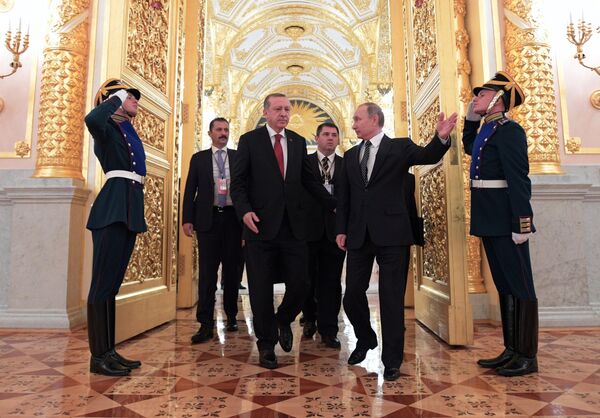 According to Avatkov, the issue of sanctions prevailed in Turkish media ahead of the visit.

"Those firms and companies that are now represented in Russia should be relieved of the sanctions and restrictions that were imposed on them," Erdogan said at the sixth meeting of the High-Level Russian-Turkish Cooperation Council in Moscow.

"Regardless of the will of the presidents of both countries, in reality the process of easing the sanctions is slow in coming. We have been patiently waiting for the end of the procedures, but are now aimed at the final solution of the issue," added Turkish Minister of the Economy Nihat Zeybekçi.

"It wasn't easy to refuse Erdogan. The Kremlin has been lingering over lifting agricultural sanctions for far too long already (clearly in favor of Russian manufacturers, who needed time to get rolling)," Mirzayan notes.

'If Erdogan Starts Confronting Moscow It Will Bury Turkey'
As a result, he says, Vladimir Putin made advances to his Turkish counterpart.

"The meeting in this format is taking place after a pause caused by the well-known tragic events. Proactive political dialogue resumed between our countries, and so did efforts by foreign ministers to coordinate strategic planning. The mixed intergovernmental commission and bilateral civil society forum have also resumed their work," President Putin said at the meeting of the High-Level Russian-Turkish Cooperation Council.

Meanwhile, Erdogan is in talks about prospects to increase the turnover between the two countries up to $100 billion (in 2016 it amounted only to $15 bln).

The Russian President however, Mirzayan says, was "not that optimistic" and noted only the opening of new horizons for cooperation.

Four Issues to Define the Agenda of Putin-Erdogan Talks in Moscow
With the foreign policy issues it was far more complicated, the Russian geopolitical analyst says. Putin and Erdogan very likely discussed a whole spectrum of international issues from Nagorny Karabakh to the European problems. However Syria and Iran might have topped the agenda.

Moscow and Ankara have already reached a high level of understanding and respect each other's interests in the Syrian conflict, and can even "understand and forgive each other's errors" such as the accidental Russia's air strike on February 9, which resulted in the death of several Turkish servicemen or the reluctance to use the crash of the Syrian jet on the Turkish territory for its own PR purposes, Mirzayan says.

Regarding the latter, he adds, the sides agreed on the most neutral explanation that it crashed due to a technical malfunction.

However, he adds, both sides still have sharp disagreements over the future of Syria.

"For Turkey, the Kurds remain the most painful issue in the Syrian agenda. Ankara is against any kind of autonomy for them and keeps labelling all the Kurdish structures, even those which are fighting against Daesh, as terrorist," says Avatkov. 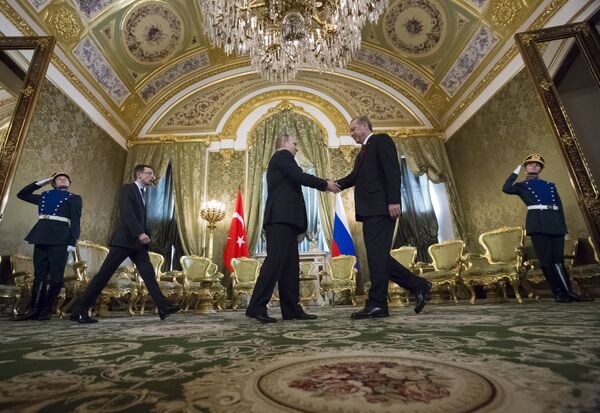 Moscow's position is different, he says. The Kremlin is ready to cooperate with the Kurds in the region and is advocating their inclusion into the Geneva peace negotiations and does not mind their autonomy in the future Syria.

However, he further noted, Moscow and Ankara will find an agreement in the above issues only when they agree on the rest items of the Syrian agenda, namely the future fate of Bashar Assad.

"Turkey keeps denying the legitimacy of the Syrian president even without openly voicing it," the expert says.

"Ankara still hopes that Assad will be replaced by some moderate Sunni Islamists who will cooperate with Turkey on a number of issues," he adds.

How Netanyahu Wants to 'Muzzle' Iran With the Help of Russia
Most likely, he says, decisions on the future of Syria will be subject to further negotiations, and more between of Russia, Turkey and Iran rather than just between Russia and Turkey.

It is no secret that the US and Israel want to setup some regional block on counteraction to Iran, Mirzayan says. A day before Erdogan, Israeli Prime Minister Netanyahu paid a visit to Moscow, who came to convince Putin to take part in the game "kick Iran out of Syria."

Even if it seems very unlikely that the Israeli high official was successful, theoretically, he says, it could be much easier to do it with Ankara. Iran has been Turkey's rival in the region for a long while, and Ankara has been supporting the Syrian war for the very same purpose: to knock Syria from under Iran's influence. Why not try it again, the geopolitical analyst suggests.

However, he further reasons, it is not of any benefit to Turkey any longer. First, according to Avatkov, Erdogan is fully satisfied with the Russia-Turkey-Iran format in terms of settlement of the Syrian crisis (Ankara was guaranteed the safeguarding of its interests in the future settlement of Syria).

US Proposes Israel-Friendly Arab Defense Pact to Counter Iran
Besides, Turkey has made too many mistakes in recent years and it needs partners in the Middle East to be able to pursue its own interests in the region.

Given the current tensions with the European Union and the US, it is Russia and Iran which are left.

However, Mirzayan suggests, we should not rule out that "adventurous Erdogan" will still opt to break this axis and take part in the anti-Iranian campaign of the West.

The only hope is, he finally concludes, that the Turkish president has learnt the lessons of 2016 and won't break up with the only partners who treat him as an equal.