'If Erdogan Starts Confronting Moscow It Will Bury Turkey' 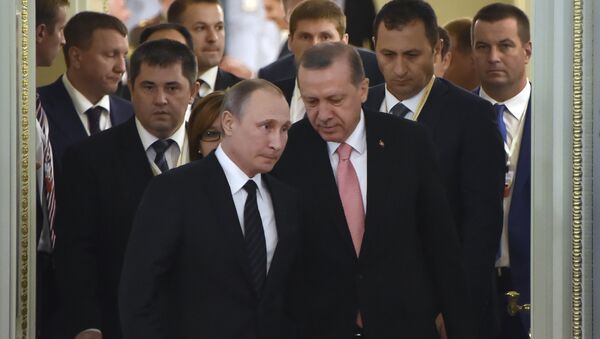 Ahead of the upcoming meeting between Presidents Putin and Erdogan, which is set to start later on Friday in Moscow, political analysts from both countries have indicated certain hidden hazards which might hinder the negotiations.

Four Issues to Define the Agenda of Putin-Erdogan Talks in Moscow
Russian and Turkish leaders are set to meet in Moscow on March 10 while the Turkish president visits Russia to attend the 6th meeting of the High-Level Russia-Turkey Cooperation Council.

Earlier on Thursday, Kremlin spokesman Dmitry Peskov said that President Putin, among others, plans to discuss the conflict settlement process in Syria and Russian Ambassador to Turkey Andrei Karlov's assassination in talks with Erdogan.

Ahead of the scheduled negotiations, political analysts from both countries have indicated certain hidden hazards which might hinder the negotiations.

Araik Stepanyan, executive secretary of the Presidium of the Academy of Geopolitical Problems has pointed at the noticeable changes which have happened at the international arena since the last meeting of the two leaders.

The Syrian government army with the aerial support of the Russian Aerospace Forces has been besetting the Islamists on all fronts. Trump has been shaping a new foreign policy tideway bypassing Turkey. EU officials have been openly criticizing Erdogan while political tensions have only intensified in Turkey. Thus Erdogan has accumulated a whole set of problems and all the above will have an inevitable impact on the negotiations in Moscow.

"Turkey is in quite a difficult situation right now: its foreign policy has turned out a real failure – the relationships with the EU and the US have greatly deteriorated. The relationships with its neighbors, Greece and Armenia are nothing better. The internal conflicts are arising one after another," Stepanyan told RT channel.

Thus, he said, Turkey will be forced to make concessions to Russia. If Erdogan starts confronting Moscow it will "bury Turkey", he added.

How Moscow Just Saved Turkey, the US and the Kurds From Duking It Out in Syria
His view is echoed by Yuri Mavashev, the head of the political department at the Center for Modern Turkish Studies, who said that the upcoming April referendum in Turkey on switching to a presidential system of governance is of extreme significance to Erdogan. Thus he will be demonstrating his voters that in Moscow he is defending the national interests and is holding an equal dialogue. But this requires Moscow to play up to the Turkish president.

With regards to the Syrian conflict which is expected to top the agenda of the talks, experts noted that while it is the Syrian peace process which is of primary importance to Russia, it is the Kurdish issue which remains a priority to Erdogan.

The two leaders, Mavashev noted, are set to find a common ground on a number of issues: the Kurds, control over the city of Manbij and Turkish – Iranian cooperation.

"Erdogan will be pushing for Russia's support in the Kurdish issue – prevention of the setup of the Kurdish enclave in the north-eastern Syria," Araik Stepanyan said.

The Turks are concerned over the setup of the Kurdish autonomy which will have a great impact on the south-east of Turkey and might lead to a setup of an independent state on the territory of Turkey.

This view is echoed by Ilnur Cevik, an adviser to the Turkish president, who told Sputnik that the Kurdistan Workers' Party (PKK) remains a real problem to Turkey.

Putin, Erdogan Seek to Collaborate on Syrian Peace Accord
"We are fighting not against the Kurdish people but with the terrorist movement within the Kurdish population. We do have discrepancies with Russia over the Kurdish issue but they do not impede the dialogue with Moscow. Our leaders and our diplomats are examining it in detail," he told Sputnik.

"It is not easy to talk about the expectations from the upcoming negotiations but we might suggest that Bashar Assad might also become a key topic of the talks. The attitude towards the Syrian president is the major factor which splits Turkey and Russia," he told Sputnik.

And it is one of the key factors which hampers the peace talks in Astana, he added. While Turkey keeps treating the Syrian leader as an adversary, it has not yet defined its position towards the future peace process, and namely will Assad have any chance to remain the head of the Syrian state or be part of the coalition government, he told Sputnik.

Meanwhile Turkish political analyst, an expert in international relations and international law Mesut Hakkı Çaşın has pointed out to Sputnik Turkiye that the recent meeting of Russian, Turkish and US military chiefs in Antalya comes as a very important signal before the negotiations in Moscow.

Details of First Meeting of Russia, US, Turkey Military Chiefs on Syria Revealed
On March 7, Turkey’s military chief of staff, General Hulusi Akar, was hosting a meeting with the heads of the US and Russian armed forces in the southern Turkish province of Antalya.

The meeting was attended by Chairman of the Joint Chiefs of Staff General Joseph Dunford Jr., Chief of the General Staff of the Armed Forces of Russia Valery Gerasimov and Turkey's military chief of staff General Hulusi Akar.

"In the times of the Cold War, the US and the USSR were the leaders of the two blocks – NATO and the Warsaw Pact. Turkey was then an important fortress on the south flank of NATO," he told Sputnik.

From the historic point of view, the recent meeting of the top brass of the three countries signals that they met not as rivals but as partners, he noted. He further suggested that Russia might have played a role of an intermediary between Turkey and the US.

"There is an opinion that the three military chiefs met in Antalya to prevent any possible clash on the ground in Manbij," he told Sputnik. He further called it an important political and military example of cooperation in the history of NATO and Turkey.

Erdogan: Turkey Ready to Crush Daesh in Syria Jointly With Russia
He also suggested that the military operation on liberation of the Syrian city of Raqqa might have been also discussed in Antalya.

And here comes another question, he said, whether there was any agreement between Russia and US.

Further announcement of the US military command that they "have been informed by the Russian side" suggests that there has been a certain agreement between Russia and the US.

The political analyst further elaborated that the top military might have discussed the military operation in Raqqa. Among possible scenarios there could be a joint operation of the Turkish Armed Forces, US special forces and Peshmerga forces, he suggested.

There is also an opportunity that Turkey will provide its Incirlik air base and that Russian Aerospace Forces will take part in the operation.

"How real these suggestion are still remains to be seen. However one thing is absolutely clear: the tripartite mechanism suggested by President Putin is of vital importance. And the meeting of the three key players, Russia, Turkey and the US is an important step for the peace settlement in Syria," he told Sputnik.

Araik Stepanyan however pointed out at yet another hidden hazard here.

"One of the main issues to Russia is how sincere Erdogan is with regards to Russia. There are concerns that if the Americans go gently with Turkey, the Turks will then divert their policies towards the West," he finally said.