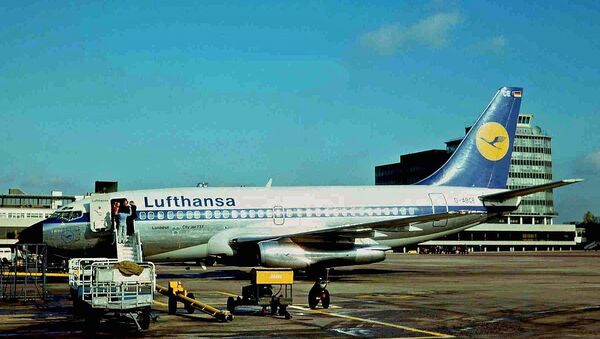 © Photo : Ken Fielding
Subscribe
An amateur aviator and entrepreneur from the German town of Flensburg seeks to recover the former Lufthansa Boeing that was hijacked by terrorists 40 years ago.

The Landshut, a Lufthansa Boeing 737-230 Advanced was hijacked by four members of the Popular Front for the Liberation of Palestine on October 13, 1977. The hijackers, who demanded the release of imprisoned Red Army Faction (RAF) leaders, had the plane flown to Mogadishu where it was subsequently liberated by GSG 9 commandos.

The aircraft was sold by Lufthansa in 1985 to a US carrier called Presidential Airways, and eventually ended up in Brazil.

Liebelt’s son, an amateur pilot himself and a Lufthansa employee, recently learned that the plane is about to be decommissioned and asked his father to do something about it.

As Liebelt told Sputnik Deutsch, when his son called him, he couldn’t help but reminisce about that time.

"The RAF time filled me with dread. Back then no one knew whether the democracy could protect itself. When the news of Landshut’s liberation was broadcast over the radio and it became clear that none of the hostages was seriously injured, it was a great relief. I remember this event just like the fall of the (Berlin) Wall," Liebelt said.

The entrepreneur is now looking to retrieve the airliner and to move it to Flensburg where the plane would be restored to a working order and stationed next to a local airport.

However, merely transporting the plane from Brazil and Germany by sea would cost nearly one million euros. Liebelt has already sought assistance from Flensburg authorities and German Foreign Ministry, but so far it remains unclear whether the government would help him cover the expenses.

Also, it turns out that Liebelt has rivals who want to turn Landshut into a museum in the town of Griesheim.

Therefore, at this point it remains to be seen where the airliner will end up and what its ultimate fate would be.