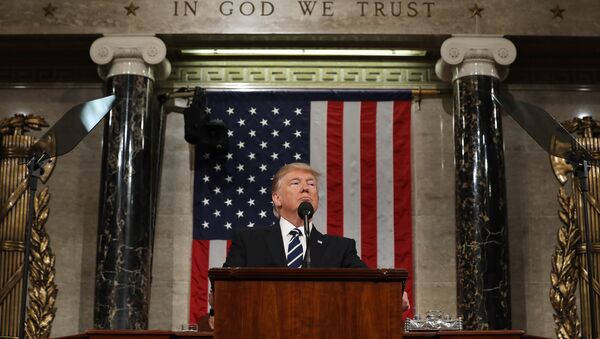 Pepe Escobar
All materials
It was, indeed, a Trumpquake. And the sequel was a given; the whole world, transfixed, in real time, 24/7, hanging on every word, tirade, feeding frenzy oozing from the swamp and its various flesh-eating monsters and manmade pathogens, deep state-related or otherwise.

Trumpquake
The Trump presidency is the ultimate larger-than-life – for many the only – show on earth. It's open to debate whether the vicious civil war currently in effect between Team Trump and powerful deep state factions enmeshed with the neocon/neoliberalcon galaxy is just shadowplay; or whether this is the real deal underlining the eventual crash and burn of the American Empire.

That's all too predictable, when a reality TV star becomes president. When "post-truth" pseudo and/or non-events on screen 24/7 make a mockery of "reality." When the screen determines the perception of truth; if an "event" is not on show, it never happened.

The "post-truth" battle happens – where else – on a vortex of digital screens. And that's why US corporate media is freaking out. Because now there are no limits to how much it can suppress/repress/digress; what ideas are "appropriate" to be discussed; and what taboos cannot be broken, as debating the pernicious effects of neoliberalism, globalism or the industrial-military-intelligence-security complex.

And what a pity that the neo-Gibbon who could track this Decline and Fall to perfection – in fact did it, decades in advance, died 10 years ago, on March 6, 2007.

Since 1970, when he published The Consumer Society, the West's Deconstructor-in-Chief Jean Baudrillard had been nothing but consistent. After he identified marketing as the supreme ideology and shopping as the new moral standard/modern concept of happiness, we have come to understand ourselves primarily as reified prisoners in The System of Objects (another one of his classics), duly alienated by a non-stop demented deluge of merchandise.

He was like a drunken Nietzsche figuring out the death of God – all over again. Our only way forward was to "simulate" non-stop, to repeat every instance of "liberation" over and over again, a pallid, vacuous redundancy empty of meaning. T. S. Eliot's Hollow Men marching to a Kraftwerk beat.

Then, when vacuous neo-Hegelians announced the "end of history" after the wrap-up of the USSR, heralding the Forever Rule of Western liberal democracy, he smashed the dream as a mere "illusion of the end."

Across the go-go 1980s, everyone, from the incipient anti-globalization Left to slightly anarchist alter-globalizers, from soft John Stuart Mill progressives to dejected neo-Marxists had to resort to their portable Baudrillard to understand the tentacles of the ego-driven, ego-corroded consumer medusa, spreading a toxic virus that kills any possibility of empathy and communitarian spirit.

Soros' Ideology Exposed: A Post-Modern, Post-Family, Post-Border New World Order
By the time he published America, in 1986, Baudrillard was already deep into conceptualizing the ultimate game of post-modernity; Total Sign, Total Image, Total Media, Total Culture Industry all enmeshed in a "hyper-real" web of "real simulacra." He coined the concept of reality TV even before reality TV existed. In the process, alongside Foucault, Deleuze, Derrida and Lyotard, he became a Guns n Roses-level intellectual superstar across elite US universities.

From David Cronenberg's Videodrome to the Matrix trilogy, and all the way to Westworld, here's to our Baudrillardian world under complete control, simultaneously transparent (everything is so glitteringly visible) and totally opaque (everything that matters is veiled), where what's on show is never what it seems (or, to quote Twin Peaks, a totally Baudrillard series, "the owls are not what they seem").

All aboard the total simulacrum

US Interventions in World Politics
Dead before the Obama era, Baudrillard could not have possibly deconstructed Obama's "invisible" kill list or the pathological demonization of Russia and Iran. But he did have imperial sideways encounters with both Daddy Bush and Dubya.

On the 1991 Gulf War, he wrote it never happened: no battles; no dead bodies; "asexual, chirurgical"; a "no-war"; just videogame-style abstract scenes (it would have been another story had he had access to "highway of death" footage, the US Army engaged in target practice on thousands of fleeing, unarmed Iraqi soldiers).

On 9/11, he wrote a landmark essay, The Spirit of Terrorism (which I read, startled, in Peshawar) not justifying it, but demonstrating how maximum power had to eventually elicit maximum destructive, although asymmetrical, counter-power. 9/11 was the ultimate Total Screen event.

Game of Chess: How US Officials Fall Victims to Anti-Trump Media Campaign
Baudrillard would have been mightily intrigued by reality TV master Trump – as well as the current post-truth civil war.

He would have analyzed how Trump went over virtually the whole Beltway establishment, corporate media included, to get elected, using his trademark version of Total Screen. He would have seen that Trump is far from an American Macbeth sowing Hobbesian chaos. And he would have reveled in a vicious sociopolitical American war played in real time on the Total Screen.

000000
Popular comments
Lest we forget, multicellular animals can not exist independently from a "swamp". 80% of the biomass on this planet is cannibalistic asexually-reproducing bacteria - primordial liberals ! They live, literally, in our guts. Cooperation and digestion are not mutually exclusive. Either mode may predominate in order to optimize energy flow through the system.

AnomicDust
7 March 2017, 21:39 GMT1
000000
Modern philosophy is dead in the water, thank God. Has been for a good while. The intellect is simply not up to the job of understanding human affairs. Period. And now we're seeing the beginnings of a colossal struggle in the US, in which normal, ordinary, red-blooded people are out to repossess their lives and force the modernist, ultra-rationalist, super-intellectualist, algebraic androids to accept that their day is done - even though that "day" has been some 5 centuries long in the West. Interesting times are ahead.