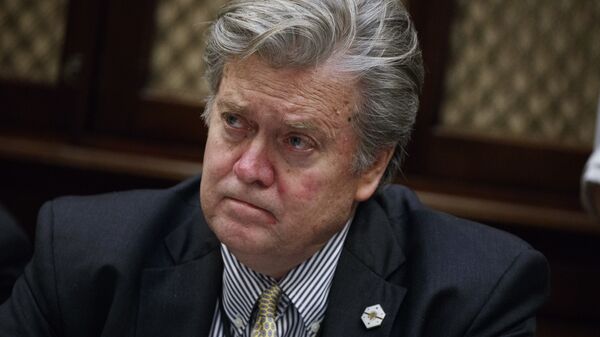 Pepe Escobar
All materials
Amidst the deep recesses of Trumpology – the new discipline crammed with “experts” trying to decode the new American presidency – it has become fashionable to deride Chief White House strategist Steve Bannon as a Jurassic Park-style sociopathic swamp creature, a “quasi-fascist” comparable to Islamofascists.

(Even though Bannon only metaphorically qualifies as a head-chopper.)

Dismissing Bannon as a sort of 21st century remixed Machiavelli/Richelieu in cargo pants and dodgy ties amounts to a juvenile cheap shot. Kelyanne Conway may be a “knife fighter with words”; Jared Kushner may have taken the D-train from Manhattan real estate deals to shadow Secretary of State sitting in the situation room. But the man to study in excruciating detail has got to be Bannon, who eats history and political theory essays for breakfast. Dismiss him at one’s own peril.

The post-truth Machiavelli behind the most powerful of Princes sees our current geopolitical juncture as the ultimate battle between Good and Evil (no, Nietzsche’s verdict, for him, does not apply.) “Good” in our case is Christian civilization and its history of two millennia – with a possible place of honor for the Enlightenment and the Industrial Revolution.

World
Social Polarization, Post-Truth to Keep Challenging Western Democracies in 2017
In contraposition, “evil” portends a cast of “existential threat” characters – from technocrats/post-modernity elites/ secularists (the enemy within) to Islam (the enemy at large). Even China, due to atheist Confucianism, might be portrayed as “evil”.

So the stakes are clear-cut. Nuance is for traitors. And the only path to victory, according to the Bannon doctrine, is a devastating Shock and Awe against the “system”. I have previously referred to Bannon’s Leninist approach on how to capture and maintain power and destroy the old order. Yet what’s coming is more like Lenin meets Apocalypse Now.

In the Court of the Tangerine King

The dark side-drenched Bannon doctrine has been shaped by a few selected books. The crucial volume is no doubt: The Fourth Turning, by William Strauss and Neil Howe.

Strauss and Howe’s theory of history is that in every 80-to-100-year cycle – called saecula — there is a major “turning.” The concept yields from the Stoics in Ancient Greece – the birthplace of Western civilization. At a given saeculum's end, an ekpyrosis – cataclysm – is inevitable; the old order is destroyed and a new one is born.

How Trumponomics Will Affect the Global Economy in 2017
Following Strauss and Howe, Bannon believes we are now right in the middle of the Fourth Turning. Strauss and Howe identified the first three turnings, in American terms, as the Revolutionary War; the Civil War; and the Great Depression followed by WWII. Bannon sees the start of the Fourth Turning in the – still metastasizing – 2008 financial crisis leading all the way to Trump’s victory.

Historian David Kaiser, who taught at Harvard and the Naval War College, adds some necessary context. He interviewed Bannon in detail, and confirms Bannon “expected a new and even bigger war as part of the current crisis, and he did not seem at all fazed by the prospect.”

The other book crucial to the Bannon doctrine is Antifragile, by Nassim Taleb, which tears “global elites” apart, those same elites terrified by the Trump phenomenon; “We are witnessing the rise of a new class of inverse heroes, that is, bureaucrats, bankers, Davos-attending members of the I.A.N.D (International Association of Name Droppers), and academics with too much power and no real downside and/or accountability. They game the system while citizens pay the price.”

It’s impossible not to recognize Publius Decius Mus was a nifty touch; Livy, in his History of Rome, talks about Mus as a Roman consul who unselfishly sacrificed his life to lead his army in battle.

Flight 93 forcefully argues that America and the West are going down; a crackdown on immigration is a must to prevent “ethnic separatism”; and Trump is the last chance at the O.K. Corral to prevent a certified collapse of civilization.

It gets better. Anton is now entitled to a policy role as part of the National Security Council staff – which means he will work closely with Bannon to implement the New Populist Nationalism.

The parallels are fascinating. Andrew Jackson, tall, lanky, rawboned, ferocious, resentful (against all enemies) was an outsider to Washington straight from central casting; a Tennessean who grew up in the harsh hinterland of what was once the western extension of North Carolina. He was definitely not statesmanlike material. Jackson didn’t look, or act, like a traditional politician. Thomas Jefferson — as in “the establishment” – dismissed him as a man of savage instincts.

Jackson was not a fan of subtle, argued reasoning. He was blunt, and once again, resentful of anyone who dared to disagree with him. Yet he was popular exactly because he was rough; after all, he was a sterling representative of “cracker” country.

Which brings us to another crucial book that Bannon must certainly have read; White Trash: The 440-Year Untold History of Class in America, by Nancy Isenberg.

Another Republican Recession? Fed’s 2017 Economic Forecast Inconclusive
In her devastating study, Isenberg convincingly details how early Republican America was a “cracker” or squatter” country – “two terms that became shorthand for landless migrants”. In these rough times,   “city life catered to a minority of the population, as the rural majority fanned outward to the edges of civilization”, far away from “Jefferson’s idealized, commercially oriented cultivators”. “Cracker” and “squatter” were Americanisms, updating “inherited English notions of idleness and vagrancy.” And this, as Steinberg notes, added a “new class dimension to the meaning of democracy”.

Jackson’s presidency was never about equality; it was about aggressive expansion – as in the forced migration of the Cherokee Nation away from their lands east of the Mississippi, with Jackson not giving a damn to the Supreme Court opinion.

For Jackson, territorial disputes were to be settled by “Make my Day, punk” action – not fancy words. His Indian policy boiled down to the right of exercizing “retaliatory vengeance” against “inhumane bloody barbarians”. International law? Constitutional details? Jacksonians always argued he was the ultimate patriot, so these “details” didn’t matter. Jacksonians by the way were routinely derided for their lack of taste and breeding; the predecessors of Hillary Clinton’s “basket of deplorables”.

What Bannon may certainly use from reading Isenberg is how she methodically destroys “historical mythmaking”, an idealized American past that “relies exclusively on the storied Pilgrims, or the sainted generation of 1776”; “This is how we got the primordial Puritan narrative of a sentimental community and a commendable work ethic”. With the inevitable corollary that “the landless, the impoverished, the progenitors of future generations of white trash conveniently disappear from the founding saga”.

And that totally dynamites the foundation stone of American Exceptionalism. The reality was that most settlers in America did not regard their forced exile as building a “City Upon a Hill”; “during the 1600s, far from being ranked as valued British subjects, the great majority of early colonists were classified as surplus population and expendable “rubbish”.

These “expendables” were the predecessors of the white trash/”deplorable” galaxy  – most of which arguably voted Trump. The Bannon doctrine requires their undivided attention and support if the Fourth Turning apocalyptic struggle is to be won. Thus Andrew Jackson Trump, against all odds, against all enemies, must rise to the occasion – and fulfill his destiny as the Savior of Christendom.