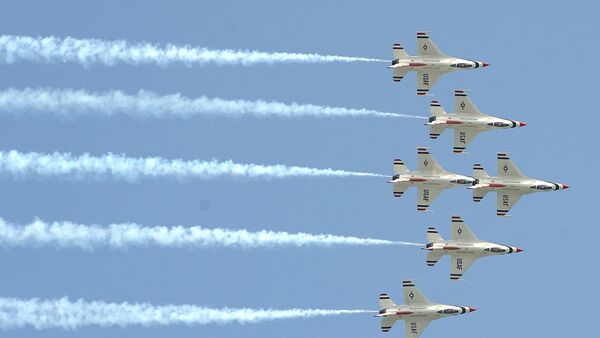 Pentagon officials have called on defense contractors to demonstrate ‘shovel-ready’ jets that military leaders could use for immediate, low-end combat in the Middle East, Defense News reports.

“We are going to formally invite industry to participate,” Air Force Gen. David Goldfein said. Service officials said that the demos will help finalize the decision for which aircraft will become part of the OA-X program record, the news outlet reported. “Bring us what you have that fits the basic criteria of what we’re looking for,” he said, adding, “this is not something we’re looking to do a lot of research and development on.”

The idea is to divide the labor among combat missions, acting Air Force Secretary Lisa Disbrow said. “This concept could free up higher-cost, higher-performance platforms from doing low-threat missions,” Disbrow said, during a speech at a recent Air Force Association symposium in Orlando, Florida. The concept demos will take place at Holloman Air Force Base in New Mexico, Defense News noted.

The service claims to be taking a more economical approach with the upcoming flight competition. “We want to see if there’s a business case there,” Disbrow said. In a 2009 paper, Maj. Steven J. Tittel argued that, “fielding a lightweight ground attack aircraft could enable the US Air Force to redeploy the bulk of its legacy fighter fleet to home stations and resume non-contingency operations.” Service officials hope that a fleet of cheap, accessible and efficient aircraft could give some of the service’s other jets, such as the F-35, F-22, and F/A-18, some reprieve, with reduced annual flight times, “and thereby extend expected service life.”

Within the service, the jury is as to whether the strategy would be as effective as it appears on paper. Air Combat Command head Gen. Herbert ‘Hawk’ Carlisle said on February 25 that the OA-X program may not be the best use of Air Force resources. Redirecting a substantial portion of air operations to lower-cost aircraft could reduce the load on legacy aircraft, but they may not be effective in the evolving threat environment of the Middle East. “Depending on what the OA-X looks like, would it be viable in the environments that we’re going to try to operate in?”

Carlisle will soon leave his post as ACC chief, however, which could shift the direction the Air Force chooses to take with respect to the OA-X program. Lt. Gen. Mike Holmes was nominated to replace Carlisle in September 2016 and took a slightly different track when talking about OA-X. “The question is,” he said, “how do you afford it?”

The US has spent an estimated $4 to $6 trillion on its 16-year-and-running War on Terror. Considering other expenses that will show up further down the road, such as health benefits for veterans and interest on the loans used to pay for military operations, the total figure could be much higher. While a much smaller number of US troops remain stationed in the Middle East, this has not reduced US military presence in the region, it just looks better politically for local forces to do Washington’s bidding while most American troops stay home and the US contributes airstrikes with conventional aircraft and drones. This has become the ‘playbook’ of Middle East operations since Hillary Clinton’s tenure as US Secretary of State and the 2013 decision by Washington to not send new battalions of ground troops to Syria.

“The counter question is, how can you not afford it? Or, can you afford not to because of the operating cost difference?” Holmes questioned further. “Right now, the thing that’s growing faster than inflation and eating up space in our budget is operating costs.”