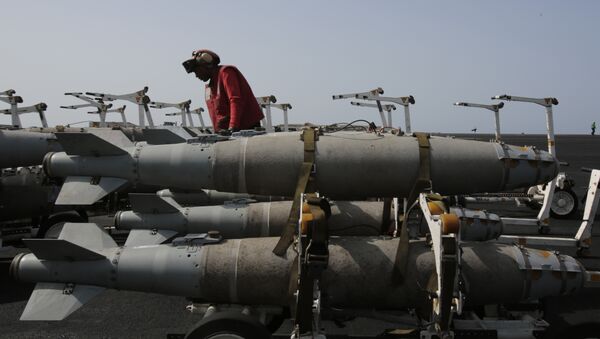 The supercarrier USS Carl Vinson is straddling a key waterway in the South China Sea between Taiwan and China as part of mission "Third Fleet Forward." According to the strike group commander, the experiment is going “really well,” the San Diego Tribune reports.

The Third Fleet has patrolled the east Pacific and north Pacific regions since the end of World War II, but is now sailing through the western Pacific theater, a move noted by The Global Times, the Chinese daily English-language publication, as proof “that the US military will increase its provocation and involvement in the South China Sea.”

Speaking from belowdecks on board the Carl Vinson, with jets soaring from the ship’s runway, Rear Adm. James Kilby told the San Diego Tribune, "the Third Fleet Forward concept is working really well." Sailor morale is "upbeat" and "positive,"Kilby said, adding, "I can’t be more proud of the sailors in this strike group and what they’re doing."

“We continue to deploy here and try to send a message to our friends and allies that we’re here…we’re providing security. We’re providing presence. We want to work with them in exercises and we’re certainly doing that on our deployment,” Kilby said.

Escorting the Vinson are the Ticonderoga-class cruiser USS Lake Champlain, along with two guided-missile naval destroyers, the Wayne E. Meyer and Michael Murphy, the Tribune reported.

The National Journal reported that the current mission of the Carl Vinson and her escorts marks “an apparent shift from the Obama administration’s policies of ‘de-escalation’ and accommodation towards the People’s Republic of China.”

Meanwhile, officials from China and the Association of Southeast Asian Nations held a conference in Bali last week to discuss the possibility of forming a binding code of conduct to resolve disputes in the South China Sea. The meeting, according to intelligence service Stratfor, "raised more questions than it has answered."