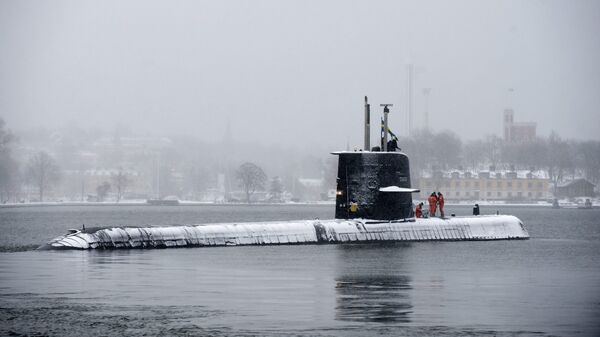 Amid the perennial Russian 'threat', the Swedish state seems to have had second thoughts about having sold off a submarine port on the strategic island of Gotland back in the 2000s. Needless to say, negotiations with the Armed Forces quickly sped up after a "Russian oligarch" emerged among prospective buyers.

Half of Swedes Intimidated by Government's Tall Tales of Russian 'Threat'
After having "absent-mindedly" sold the submarine port of Skälsö, located in Fårösund, Gotland, more than a decade ago, the Swedish state is now seeking to reclaim it, lest it fall into the hands of Russians. Last week, London-based Russian banker, entrepreneur and investor Vladimir Antonov was mentioned as one of the prospective buyers by the Swedish business newspaper Dagens Industri, which naturally stirred a debate in Russia-wary Sweden.

Today, the Swedish Fortifications Agency and the Armed Forces are trying to recover the port they themselves divested in 2004.

"We simply have a need for the port," Armed Forces Press Chief Philip Simon told the Swedish tabloid newspaper Expressen.

​Now that Sweden is intent on re-militarizing Gotland, the Russians' alleged interest in the former military port, which happens to be the only one of its kind on Gotland, provides a comfortable pretext for yet another round of anti-Russian sentiment. Neighboring Finland previously announced the cancellation of a number of property transactions involving Russian buyers, which was labeled a new "hybrid war" phenomenon.

"I demand that the Minister of Defense immediately stop this. It is gross negligence that it has not already been done," Jan Björklund said, as quoted by the Swedish daily Svenska Dagbladet.

Sweden Puts on War Paint, Prepares for Highly Unlikely Russian Invasion
According to Dagens Industri, Antonov is so far the highest bidder with 82 million SEK ($9mln), which is much higher than the Swedish Defense believe the port is worth. Nevertheless, current port owner Joachim Kuylenstierna told Dagens Industri that he would prefer the Armed Forces as the final buyer for safety reasons. According to Dagens Industri, Kuylenstierna also offered the state a trade-off decision: renting the port for 4 million SEK ($440,000) for six years in order to subsequently buy the property for 50 million SEK ($5.5 mln).

In an interview with the Swedish news outlet Nyheter Idag, Kuylenstierna refused to either corroborate or disclaim that Antonov is an interested party. According to Lars Carlström, a friend of Antonov and his former advisor, Antonov's name and the Russian connection may have been used in order to bid up the price, Expressen reported.

In Sweden, Antonov is best known for having tried to take over Saab Automobile. However, the deal was stopped by the Fredrik Reinfeldt government after Antonov was proclaimed an unsuitable bidder.