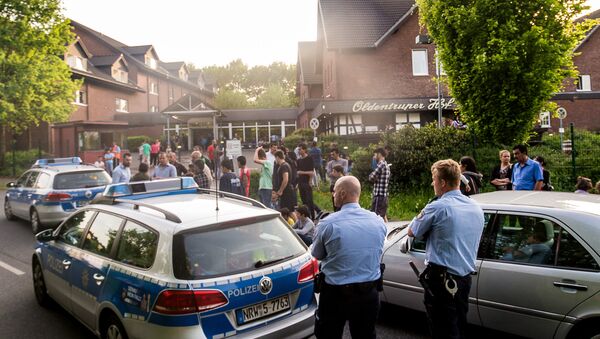 © AP Photo / Christian Mathiesen/dpa
Subscribe
Germany's far-right Alternative for Germany (AfD) party condemns attacks against migrants in the country, yet believes that the preliminary German government data showing the attacks against migrants reached the level of almost 10 a day in 2016 is overstated, spokesman for the AfD’s Berlin branch Ronald Glaser told Sputnik.

BELGRADE (Sputnik), Victoria Mladenovich — On Sunday, the German Interior Ministry released preliminary figures regarding the attacks against migrants in the country in response to a parliamentary request by German left-wing party Die Linke’s (The Left) lawmaker Ulla Jelpke. The data showed that 3,533 attacks took place in 2016, and that a total of 560 people, including 43 children, were injured in these attacks.

"Attacking immigrants or the places they live in is as wrong as attacking anyone else. As a law-and-order-party Alternative für Deutschland condemns any kind of such violence… The background of that information makes me doubt the value of these numbers. First of all, we have a lot of violence within 'refugee camps.' Certain groups (Muslims against Christians, men against women, Iraqis against Syrians, etc.) fight each other. If these numbers are included here, then it looks very different from what the political Left implies (that racist Germans attack innocent refugees)," Glaser said.

In response to the government data, Die Linke’s Jelpke said that the German government was more focused on a perceived migrant security threat than on the threat which was coming from the radical right. According to Glaser, however, even if the number of attacks committed among different groups of migrants is not included in the preliminary figures, the data still could be deceiving.

"We know that statistics regarding these aspects of life are heavily manipulated by German authorities and mainstream politicians. They want to make us believe that right-wing-related crime is growing, while foreigners are as innocent as newborn babies or at least as innocent as the average German. Ordinary police statistics speak a different language than information spread by government agencies and their propaganda departments," Glaser noted.

Furthermore, Glaser explained that the reported 3,533 attacks against migrants "is a very small number in relation to the wave of asylum seekers who came to us in recent years (approx. 1.5 million)."

For Glaser, the main fault for the conflict between migrants and Germans with xenophobic convictions lies with the German government which "makes ordinary Germany pay" for migrants.

"Most Germans get along with foreigners. Even those with xenophobic convictions can live in one country with strange foreigners, if both groups are separated from each other. Life would be much easier, if German authorities ended their top-down-policy of integrating migrants into our society and especially into our welfare state," Glaser noted.

Berlin Turns Blind Eye as Islamist Migrants Turn Germany Into Warzone - Analyst
Germany has been the key destination for hundreds of thousands of refugees and migrants coming to Europe since the start of 2015. Some 280,000 refugees came to Germany in 2016, compared to 890,000 arrivals in the previous year, according to the German Interior Ministry. The majority of the asylum seekers are from Syria and Afghanistan.

000000
Popular comments
If eurosocialist politicians hide the background on migrant crimes then they are cornered when it comes to exposing racist, anti-migrant violence. Like it or not, analysis of the issues- does demand context. Clearly, the situation in the EU is far worse than the political elites care to admit. If indigenous citizens deserve robustly defended borders, then migrants going about their daily business deserve the full protection of the law. There's a perfect balance there morally and legally. We are all united by our common humanity at the end of the day and racism is a perversion of the human spirit.