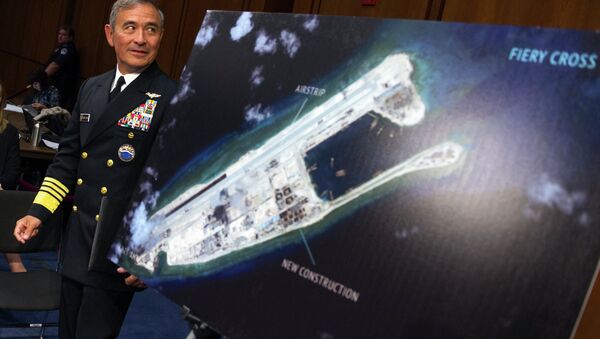 As the temperature is rising in the South China Sea over the recent freedom of navigation operation (FONOP) launched by the US and further reports that China "has nearly finished" buildings "that could house missiles", a RIA Novosti correspondent explains why the US is unable to put any pressure on Beijing.

South China Sea: Beijing Unwilling to Go Down Without a Fight Amid US-Led FONOP
On Saturday, the US navy strike group led by the Nimitz-class aircraft carrier the USS Carl Vinson and consisting of Destroyer Squadron (DESRON), Arleigh Burke-class guided-missile destroyer USS Wayne E. Meyer (DDG 108), and aircraft from Carrier Air Wing (CVW) began what the US Navy called "routine operations" in the South China Sea.

Beijing Warns US Against Planned Maritime Patrols in South China Sea
In Beijing, Chinese Foreign Ministry spokesman Geng Shuang said on Wednesday he was aware of the report, though did not say if China was planning on placing missiles on the reefs.

Commenting on the recent developments in the area, RIA Novosti political analyst Alexander Khrolenko provided his own take on the risk of a direct military standoff between China and the US, explaining that even though tensions are high, the risk of escalation is actually quite low.
"Washington has not changed its position on the disputed territories and defined water zones in the South China Sea with the election of Donald Trump. Many political analysts see the conflict between the US and China over the issue potentially more dangerous that the disputes between Russia and NATO in Europe," he writes in his article for RIA Novosti.

"However unchanged political rhetoric and the unpredictability of the latest events only demonstrate that any naval clashes off China's coast are very unlikely," the political analyst said, reminding the recent claims of US new defense secretary that there is no need for large-scale US actions in the South China Sea.

He further provided his reasons why the US' policy of "containment of China" is so contradictory.

Up to one third of the world's naval freight traffic volume goes through the South China Sea, as well as 75 per cent of the Middle Eastern crude oil shipments to the Asia Pacific Region, over 40 percent of which are going to China. Over $5 trillion of world trade transit annually (including $1.2 trillion in US trade transits annually) goes through this part of the World Ocean.

South China Sea Dispute: Brinkmanship of US and China Can Lead to Major Showdown
Over a hundred islands and reefs make it easy to efficiently control the shelf which holds deposits of over 5.4 billion barrels of oil and over 55.1 trillion cubic meters of gas (according to the data of the US Department of Energy).

"The growth of China's economic and political influence has the US worried, but they have practically no means to hinder this process. It is not by chance that one of the most influential Chinese papers, People.cn has urged Beijing not to allow the US to disrupt the status quo in the South China Sea," the political analyst said.

He finally stated that it has become evident that the development of China's economy and its armed forces will allow China to further peacefully develop resources of the three adjacent seas and other areas of the World Ocean regardless of the US Washington's will and Pentagon's "signals."