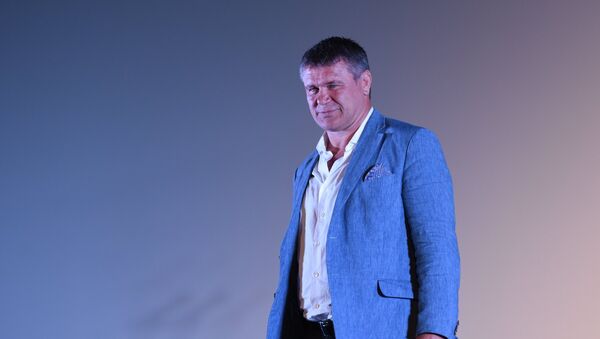 © Sputnik / Ekaterina Chesnokova
/
Go to the mediabank
Subscribe
International
India
Africa
A Hollywood film studio got in touch with renowned Russian MMA fighter and actor Oleg Taktarov, asking him to a play a role in a film about the Ukraine crisis that was "too political," the actor told Radio Sputnik.

Renowned Russian MMA fighter and actor Oleg Taktarov refused a lucrative offer from Hollywood to play a politicized role in a movie about the conflict in eastern Ukraine.

"I'm short of money like never before, but I've already said 'no' to this 'lucrative offer' from Hollywood… I'd rather starve," the actor wrote on his Facebook page, where he relayed the plot of the screenplay he was sent.

"Male, Russian, late 40s, Roman is the leader of a group of Russian Separatists, fighting in Ukraine with cunning and brutality. After massacring a peaceful Ukrainian village, Roman and his men go after the downed US planes and the trio of Navy officers who are trying to elude them," the screenplay reads.

Taktarov told Radio Sputnik that he refused the offer because it was too political. The film's plot reminded him of the 2001 American action war film Behind Enemy Lines, which was controversial because of its inaccurate portrayal of the Bosnian war.

"This time, it was a similar project, but Ukraine and Russia, not really any extraordinary or fresh ideas. I think it was a just a money-making project, nothing special," Taktarov said.

"In my opinion, the description of the story was quite horrible, and I wrote, 'I can't play this crap, I'm sorry, it's too political," he said.

Taktarov 'Would Rather Starve' Than Play Evil Russian in Donbass for Hollywood
The actor said that filming a movie on the subject of the Ukraine crisis is too political at the current time, since the conflict in eastern Ukraine is still ongoing.

"It's too fresh. Maybe in five or ten years we can do something like that, but now it's too early. We still don't really know what's going on there and I wouldn't make decisions, especially in films."

"As an actor, I don't like to play a good or bad character. In life, there is no such thing as good or bad. There are always shades of grey, something in between," Taktarov said.

However, all is not lost for the actor, because the film's producers got in touch with him about a revised screenplay.

"Luckily, I got the response that production is willing to change something in the script. I guess they had a thought that it was too political. I might still do it, I have to send an audition just to see how I look right now, and they said they're going to work on the script to try to change the story. That's more like it," Taktarov said.