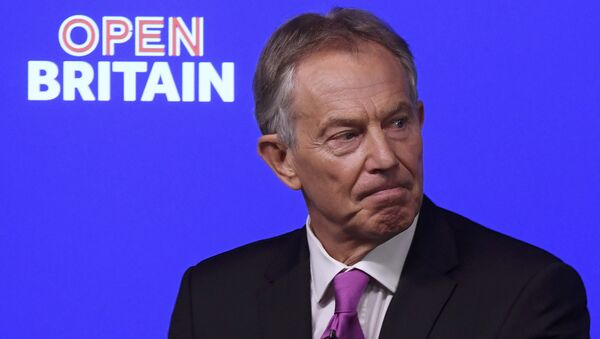 John Wight
All materials
Just when you thought it was safe to venture out again, Frankenstein returns - at least its political equivalent in the shape of Tony Blair, Britain's former prime minister and poster child for the venality, corruption, and opportunism of Western liberalism in our time.

Blair's decision to intervene in the on-going political crisis that has engulfed the UK over Brexit can only be described as offensive. His call to arms, urging the British people to "rise up against Brexit," which he issued from that renowned fortress of people power the City of London, will only harden support for it, given that Blair is emblematic of everything wrong with liberal democracy.

Tony Blair today gave a keynote speech where he made clear that we must avoid 'Brexit At Any Cost', which the Govt are currently pursing: pic.twitter.com/hyZbdDwRAJ

The man is a deluded fool if he really thinks that he has the credibility or clout to make any such intervention in frontline politics anything other than a car crash. With the anniversary of the start of the 2003 war in Iraq upon us next month, bringing with it the memory of the role that Blair played in destroying an entire country, leading directly to the deaths of up to one million people, along with the destabilization of the region and an explosion of terrorism that has wrought so much carnage in the years since, the only place that Blair should be giving any speech nowadays is from the dock at the International Criminal Court in The Hague, where his presence is long overdue.

Tony Blair, along with Barack Obama and Hillary Clinton, exemplifies everything rotten about liberal democracy. Whether it is their attachment to the interests of Wall Street and City of London, the abandonment of the poor and working class in the interests of the politics of identity, the worshipping at the altar of the free market and neoliberalism, not forgetting the slavish devotion to Western imperialism under the rubric of democracy and human rights — these people have turned the world upside down and enriched themselves and their cronies beyond measure in the process.

"People voted without knowledge of the true terms of Brexit. As these become clear it is their right to change their mind." TB @Open_Britain

I personally abhor everything that Brexit represents, the explosion of right-wing populism, driven by anti-migrant bigotry, nativism, and ultranationalism, fueling it. But I also understand that it feeds off the collapse of center-ground liberal politics and the hollowing out of social democracy that took place under Blair's leadership. Likewise when it comes to Trump and the venality of Obama's leadership in the US.

The global financial and economic crisis that erupted in 2008, the impact of which we are still dealing with almost a decade later, was a direct result of the neoliberal policies embraced by Blair and Bill Clinton throughout the 1990s — policies embraced by the governments that followed them in London and Washington thereafter. The cynicism and anger towards the political elites in both countries did not occur overnight either. It built up over years, to the point where a referendum on Britain's continuing membership of the EU provided an opportunity at long last for those who'd suffered most under those neoliberal policies to vent their disdain for Westminster and liberalism at the ballot box.

A similar set of circumstances underlay Donald Trump's election to the White House on the other side of the Atlantic.

Do any of his impassioned liberal detractors every take a moment to ask themselves why a real estate mogul and reality TV star with no political experience was able to best such experienced national politicians such as Jeb Bush, Marco Rubio and Ted Cruz to win the Republican Party nomination in 2016, and then go on to defeat Hillary Clinton for the presidency later in the same year?

The answer is, of course, that these are politicians whose records are a testament to long years of service to a Washington machine that is loathed by millions of Americans.

Not until the political establishments in both the UK and US finally accept their responsibility for the rejection of everything they represent will there be an end to the political and social polarization that is the new normal in both countries.

In this respect, they remain stuck in the past, holding onto a belief in the verities of the free market, in NATO, in Western exceptionalism like those Japanese soldiers who failed to emerge from the jungles and foxholes in which they served during World War II for decades after the war ended.

Blair is yesterday's man. Setting the world on fire, then swanning off into a sunset of unparalleled riches and wealth, the ill-gotten gains he received for services rendered to some of the most corrupt and unsavory governments, corporations and causes in existence, describes a level of injustice that cannot but leave a bad taste in the mouth.

Worse than yesterday's man, however, Tony Blair's every public appearance and utterance is an insult to the millions of men, women, and children in Iraq, slaughtered as a result of the brutal and illegal imperialist war he unleashed in conjunction with Washington in 2003.

Blair's shameful attempt to place himself back at the center of mainstream politics only reminds us that their cry for justice from the grave is one that is still to be heard.