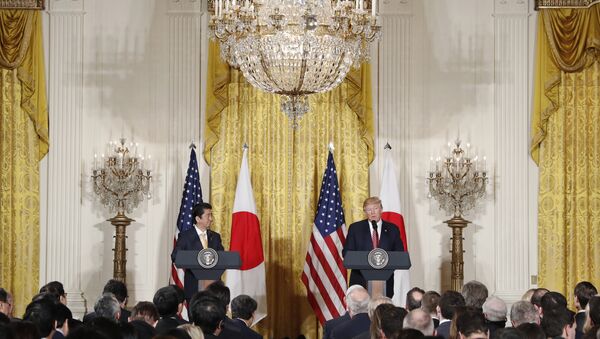 The Prime Minister of Japan has called DPRK's ballistic missile launch "absolutely intolerable". He also said that he had agreed with Trump to enforce US-Japanese alliance.

"President Trump and I myself completely share the view that we are going to promote further collaboration between the two nations, and also we are going to further reinforce our alliance," Abe added.

Donald Trump has said that the United States "stands behind" Japan "one hundred percent".

"I just want everybody to understand and fully know that the United States of America stands behind Japan, its great ally, one hundred percent," Trump said in Mar-a-Lago, Palm Beach in Florida.

A missile was reportedly launched earlier from an airbase in the western province of North Pyongan and travelled around 300 miles before plunging into the Sea of Japan outside of the Japanese exclusive economic zone.

Japan’s National Security Council met earlier in the day to discuss the launch.